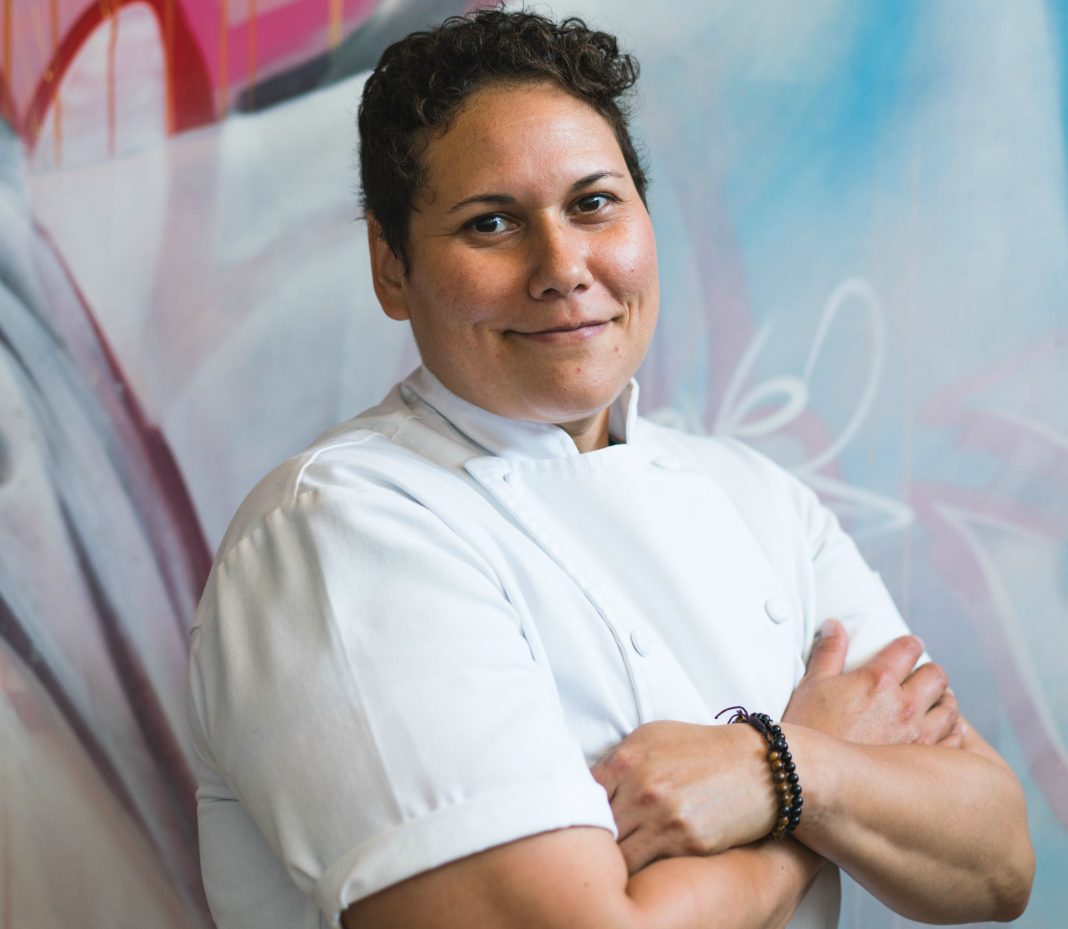 When Teresa Montaño first made her way to California from her home in New Mexico, becoming a chef wasn’t even on her mind.

“I thought I would be a professional soccer player,” she says. “I played soccer starting at age four, it was my first love and my talent.” But, after playing for Pepperdine through her undergraduate years, she found herself pivoting to a career in food. That work lead her to some notable L.A. kitchens, journeys around the world, and now to the launch of her second restaurant as chef-owner, Otoño. The modern Spanish restaurant opens in Highland Park tonight.

Montaño’s exploration of Spanish flavors at Otoño may come as no surprise to anyone who dined at her first restaurant, Ración, a Spanish-inspired concept that lasted six years in Pasadena. Her passion for the cuisine goes back to one of her earliest restaurant jobs in L.A.

“When I was a line cook at Ciudad, I was assigned to do a weekly special called ‘Paella on the Patio,’ an expo paella station that we would set up outside, and serve two paellas with a tapa starter,” she recalls. “I went all in on that assignment, and fell in love with the ingredients I was working with. Saffron, pimentón, squid ink, chorizo, mariscos. The cooking was challenging and nuanced, and the flavors were so delicious.”

Eventually, she needed to see the country for herself to continue her immersion in the food and culture.

“I decided to call up my best friend and book tickets to Barcelona,” she says. “After that trip, it was all over. I knew what I was into. I’ve since returned to Spain several times, experiencing different regions. Ración was my travel journal from San Sebastian, and an ode to Spanish fine dining in a way. Otoño is what I want to share from my recent experience in the Catalan and Valencia regions. Otoño is me coming full circle from that first experience at Ciudad and that first trip to Barcelona.”

That means a menu full of Montaño’s updated takes on classic sharable plates (braised octopus with summer bean and chimichurri; croquettes with wild mushroom, truffle, and goat milk; conservas of seafood caught off Spain’s Atlantic coast) and, of course, paellas, accompanied by a list of natural wines and gin-focused cocktails.

“I think two things that will be felt from my travels are the paella and the gin program at the bar,” Montaño says. “I had never understood the depth and the craftsmanship that goes into both of these specialties until I visited Valencia. The amount of flavor crammed into one grain of rice at Casa Carmela in Valencia blew my mind; the cookery was so exciting to me. The gin I tasted was so unique and unlike what is served here in the U.S.  I had to bring both of those ideas with me and execute them with those fond memories in mind.”

Her passion for Valencia even extends to the decor in Otoño.

“I was blown away by the street art in Valencia. The juxtaposition of the modern street art and historical, classic architecture was stunning to me,” she says. “I would just wander around snapping pictures of the street art and popping into bars for food and drinks. When I got home to L.A., I researched Valencian street artists and began to Instagram stalk PichiAvo, a famous duo whose art layers classic graffiti with classic art.”

After a bit of convincing, she was able to get them to come to Los Angeles to create a mural for the restaurant. The artists’ layering of styles, cultures, and eras, was a perfect metaphor for the concept Montaño hopes to achieve with Otoño.

“Our food, beverage, and design is based on this juxtaposition of old and new, classic and modern, street and elegance,” she says.

Maybe Montaño’s understanding of those juxtapositions was why food writer Jonathan Gold, who himself moved seamlessly between street-food culture and fine dining, so appreciated her cooking. He named Ración one of his 101 Best Restaurants and was a major influence on her professional life.

“I am so incredibly fortunate to be a part of a generation of young chefs who were graced by Jonathan Gold’s acknowledgment and support,” she says. “He had a magic touch and so many chefs in L.A. not only wanted to impress him, but looked to him for inspiration. He was our Michelin. He pushed us to be better cooks, and we are all very lucky to have had that experience and opportunity.”

After his death in July, she felt that she had to push herself to be just that extra bit better with Otoño.

“Over the weekend, a wine vendor friend attended our soft opening,” she says. “He came up to me after his meal with tears in his eyes, he grabbed my arm and said, ‘I’m so sad that Jonathan Gold can’t taste this food.’ That comment hit my heart so hard, but also motivated me to be at my best.”

Along with Gold, another pair of notable mentors who played a role in Montaño’s development are Susan Feniger and Mary Sue Milliken of Border Grill. Montaño worked the Border Grill food truck before joining Feniger and Milliken’s concept Ciudad (which eventually became the downtown Border Grill location).

“I have so much respect and gratitude for both Susan and Mary Sue,” she says. “They paved the way for female chefs not only in L.A., but in the whole country. They are pioneers. I’ve always admired their leadership in the restaurant community. I remember cooking alongside Susan and being so inspired by her energy and ability to taste a dish and know exactly what it needed to be its best.  As a young line cook, it was inspiring me to see Susan in the kitchen, elbow-to-elbow with her teams. I always wanted to possess the same kind of energy.”

Now Montaño is establishing herself as a leader in the restaurant community of her own generation, particularly on matters of environmental sustainability. During culinary school, she worked at a Tender Greens, and took the opportunity to learn more about agriculture and transparent ingredient sourcing. More recently, a stint at Amass restaurant in Copenhagen exposed her to new approaches for minimizing food waste and focusing on vegetable-forward dishes.

“At Otoño, I have committed to working with one single ranch for my meat, Marin Sun Farms. I think the quality and integrity is outstanding, and I like the peace of mind that comes with this commitment,” she says. “I will be pushing my team to limit waste and innovate instead of throw away. I don’t think I know any other way to run a kitchen.”

Now that Otoño is open, she gets her chance to show diners everything she’s been working on.

“I want everyone to feel our excitement and energy,” she says. “We really want to be here doing what we are doing. We put a lot of love in what we do, I want our guests to feel that love and care.”

Bringing in the Dough at Bub and Grandma’s