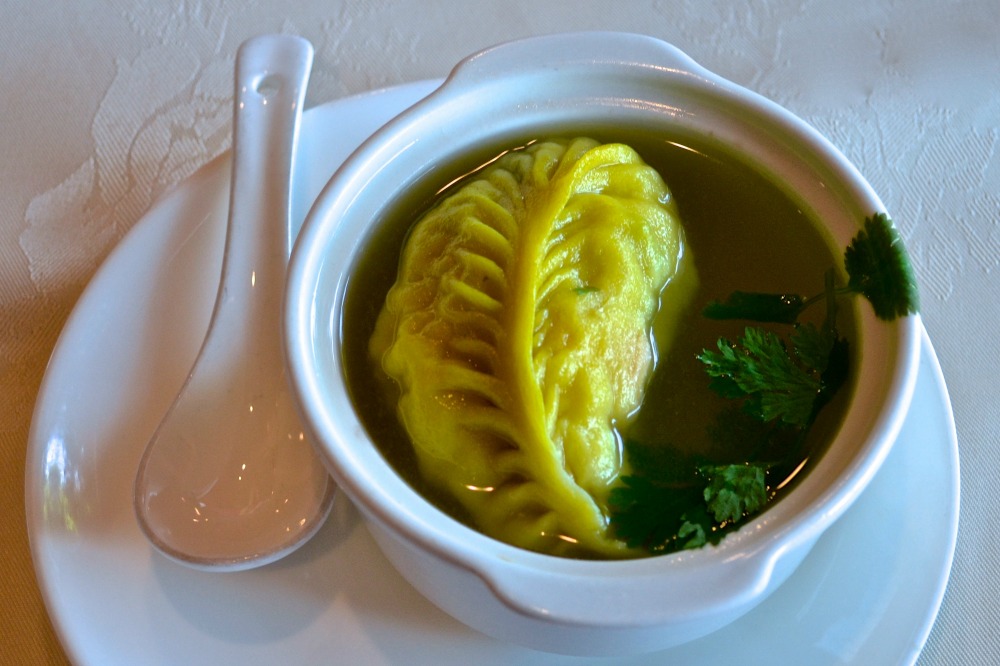 Think of Chinese soup dumplings and what comes to mind? Maybe the image of a colorful straw jutting out of a softball-sized tang bao bursting with pork, crab meat, and broth? Or could you be envisioning a bamboo basket populated by juicy xiao long baos?

At China Red, a new dim sum restaurant in Arcadia, another, much burlier and intimidating version of soup dumpling exists. This particular style huddles in a sweet seafood and chicken broth like Jabba the Hut in his flying palace. There is no actual liquid in the dumpling itself. It’s simply a monstrous dumpling encased with an egg flour wrapper. Succulent, snappy chunks of prawn and tender crab flesh are stuffed into a filling. The trademark pinched folds on the spine of the dumpling resemble an ancient fossil begging to be cracked open.

This Deluxe Soup Dumpling ($3.98) at China Red is sometimes known as “Shark Fin & Prawn Dumpling in Superior Soup” at restaurants in China where shark fin is legal. If you haven’t been living under a foodie rock for the past couple of years, you’ll know that shark fin is illegal to sell in California. So, some Chinese seafood houses like China Red have reinvented this high-end dim sum relic to conform to current legal standards and tastes. Thus, the deluxe soup dumpling was created.

There is absolutely no attempt to substitute the thin, plastic, noodle-like texture of shark fin in China Red’s retooling. It’s simply a sumptuous blimp of a dumpling that satisfies with savory, sweet, and oceanic flavors. To be sure, it’s a dumpling of which sharks everywhere approve.

Why Did an Alleged Chinese Spy Try to Infiltrate California Politics?

What Does a Chinese Company Want with Gay Hookup App Grindr?