Home Uncategorized On a Roll: 5 Food Personalities Who Should Have Their Own Sushi... 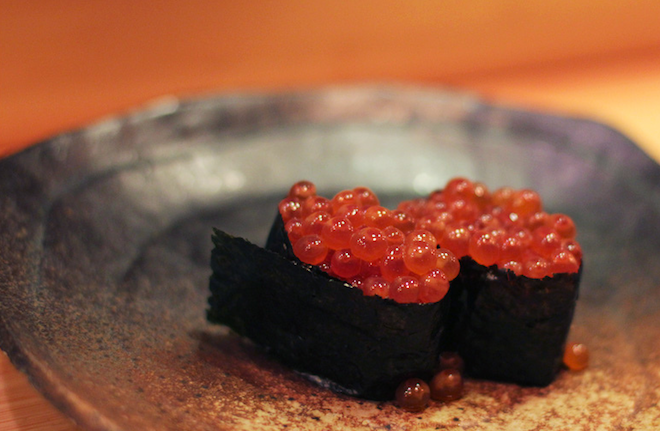 When famous faces show face at L.A. restaurants, chefs and restaurateurs take notice and sometimes flatter them by creating a menu item in their name. The Bazaar By José Andrés has a cocktail named the “Jale Berry” (after actress Hale Berry) and Pink’s Hot Dogs sells both a “Martha Stewart Dog” as well as the “Rosie O’Donnell Long Island Dog.” But because it’s Sushi Week, we had to turn our attention to Hamasaku in West L.A.

Since its inception, Hamasaku has attracted a steady stream of sushi-loving stars. More often than not, the directors, producers and actors who frequent Hamasaku get their own namesake roll. The cast of Twilight has one, and so does Oscar-winner Charlize Theron. One can even taste a “Sarah Michelle” (Gellar) roll, which is a spin on spicy tuna with avocado.

But we had to wonder: Why do Hollywood celebrities get their own roll when their expertise isn’t necessarily in food or sushi? Why hasn’t L.A.’s food elite been honored with eponymous rolls? Here now, five sushi rolls that could be:

The Pulitzer, otherwise known as The Golden Roll: Named after the only man to win a Pulitzer for food writing, L.A. Times restaurant critic Jonathan Gold, this handroll would be full of sustainable fish (a nod to brother and Heal the Bay president Mark Gold) and garnished with gold leaf.

The Angeli Roll: In honor of KCRW’s Good Food host, Evan Kleiman, and former chef/owner of (the now closed) Angeli Caffe, this cut roll could feature roasted branzino, and orzo instead of sushi rice.

The Kuh Cut: Los Angeles magazine’s own award-winning restaurant critic, Mr. Patric Kuh, should have his own roll. Or, perhaps more simply, his own perfectly pristine slice of yellowtail sashimi.

The Nancy: Though she’s more likely to be baking pizza or plating mozzarella these days, we have it on record that Nancy Silverton likes sushi. A roll with grilled octopus rolled in Piedmontese hazelnuts and served with a drizzle of lemon oil sounds like something she might appreciate.

The Kogi Rolls: A plate of spicy short-rib-filled, tire-shaped rolls wrapped in kimchi instead of nori would honor Kogi king Roy Choi.