Home Uncategorized Okonomi-what? You’ve Never Had a Pancake Like This Before 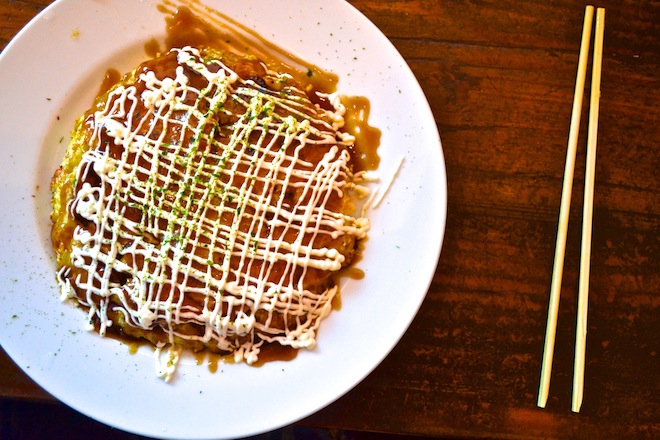 Okonomiyaki is many things. It has been described as a pancake, a Japanese pizza, an omelette, desperation cuisine, and even soul food. In the universe of okonomiyaki (and trust me, it’s a huge universe), the version at Van Nuys-based Hanabishi by Kyushu is very tame.

There are also a multitude of variants from different regions or cities in Japan, with the primary and most popular forms coming from Osaka (known as Kansai-style) and Hiroshima.

The interpretation from Hiroshima is more like a pancake sandwich, where the top and bottom “cakes” encase anything from cabbage, pork, squid, and possibly cheese, all pre-cooked. This pancake pile is further burdened with noodles or fried egg and then finished with a generous shellacking of okonomiyaki sauce, which is typically a thicker, sweetened kind of Worcestershire sauce. The Osaka okonomiyaki mixes directly into the batter flour, eggs, nagaimo, slices of pork belly, shredded cabbage, squid, octopus, shrimp, green onion, mochi, and even, sometimes, kimchi.

Hanabishi by Kyushu in Van Nuys is first a ramen house. Izakaya (or Japanese pub) is another category it satisfies. Sort of in the Osaka-style, Hanabishi’s okonomiyaki is served only after 5 p.m. when the serious drinking starts. No other Japanese dish soaks up booze in a drunk stomach as well as okonomiyaki.

Looking down at this dish, most of the plate is taken up by the dense pancake dotted with bits of squid, plump shrimp, crunchy cabbage strips, and chunks of nagaimo. Even though the interior is soggy, the fillings remain crunchy and intact.  A generous coating of okonomiyaki sauce is topped with a latticework of mayonnaise; a sprinkling of nori flakes finishes the presentation.

As okonomiyakis go, Hanabishi’s seems restrained compared to other versions I’ve had. But maybe the subliminal message here is to show restraint when imbibing—then your okonomiyaki won’t have to be so outlandish? Or maybe I just need another Kirin.