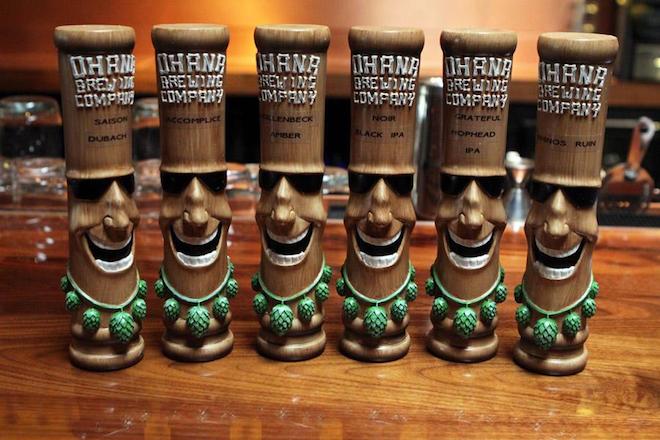 The new taproom—a cozy 870 square feet—will have beer flowing from six taps so guests can taste Ohana’s beers, take home refillable growlers, and buy merchandise. (Pint glasses and t-shirts are the first bits of swag that will be available for purchase.) The conditional use permit for the taproom will initially limit guests to sampling four 4-ounce tasters, but owner Andrew Luthi expects that in time, they’ll be able to petition the city of Alhambra for an increased allowance.

Ohana Brewing aims to offer four beers at the taproom for growler fills. Luthi explains that they will be using 64-ounce glass growlers without any branding or markings, so that patrons can use the same growler at multiple breweries rather than needing to use different growlers from their respective breweries. These blank growlers will be available for a very reasonable $4.95; fill prices will vary by beer.

Luthi still hopes to have a public tasting room at their actual brewery in South L.A., which they’ve been brewing out of since August 2012, but said that city bureaucracy proved to be far less open and welcoming to the idea than Alhambra has been. Still, he’s hopeful that the Alhambra taproom will serve as a good litmus test to start with and learn from before trying to reopen discussions on that front. “Plus,” he says, “we need a couple more [fermentation] tanks put in before we can even start thinking about another tasting room.”