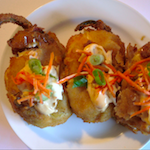 No, the Mexican line cooks on Ventura Boulevard’s gringo sushi row haven’t staged a revolt, and Guy Fieri hasn’t been hangin’ out in Culiacan, Sinaloa trying to develop a Mex-Wasabi concept. Sinaloa-style sushi has taken hold in South L.A.’s Sinaloan triangle, bordered by the 110, and where the 105 and 5 taper off and intersect around Bell Gardens and Downey. It was inevitable, what with the huge Sinaloan presence and the popularity of their wacky brand of Mexicanized, gringo sushi.

Tampico, which is a spicy krab salad, and togarishi, a blend of dried chiles and spices, are the secret weapons of Mexican sushi.

I first encountered Sinaloan sushi rolls at El Farrallon in Los Mochis where they use lots of fresh local catch. Then I saw it spread to Hermosillo, Sonora, where sushi roll juggernaut Que Rollo’s restaurants street stands have begun to replace taco vendors.

Over in Bell, Culichi Town, a Rialto-based chain, has opened next door to Corazon y Miel with a full array of sushi rolls named after cities in Sinaloa and celebrities like the Lupillo roll, named after Lupillo Rivera. The Guerra roll has shrimp tempura and krab, topped with more krab. All dishes come with grated carrots and chopped green onions and some chiles güeros, or blond chiles in soy.

You go Culichi Town for rolls, buckets of Tecate, and to flirt. If you want a low key taste of Mexican sushi, Lynwood’s Mariscos El Paisa has just converted their corner taco stand into Sushinaloa.

Sushinaloa has chiles rellenos, or battered blonde chiles filled with a mouthful of cream cheese and cooked shrimp, or a sushi roll done aguachile style, garnished with raw shrimp cooked in lime.