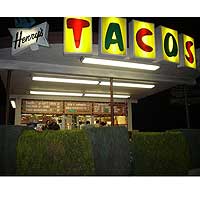 There’s a new movement afoot this holiday season—one topped with yellow cheese, a squiggle of “red sauce,” and served in a crunchy shell. The 50-year-old Studio City taco stand, Henry’s Tacos, is in danger of losing its lease. Apparently the landlord doesn’t understand the cultural significance of perfectly shredded iceberg lettuce. In protest, the neighborhood has begun to rally around the architecturally iconic gem by launching “Occupy Tujunga.” So far, all that’s sprung up is a Facebook group—no tents (yet). The organizers are encouraging folks to eat at Henry’s as much as possible over the next few weeks. With hope, and a little Santa magic, the mid-century landmark will continue slinging Americanized (but sort of addictive) taco-like-products for another half-century.

All hail the 99%-processed cheese.