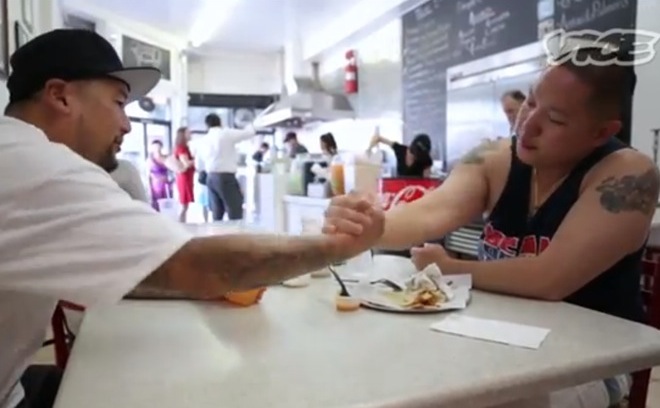 New York chef Eddie Huang (Baohaus) recently made a trip out west to experience our fine city, filming all the while for his internet video series, Fresh Off the Boat. (Which is also the name of his upcoming book.) Broken up into three webisodes, Huang’s L.A. trip thankfully takes him to several parts of town that aren’t on a typical tourist’s map.

Part one finds him around Westwood‘s Tehrangeles, aka Persian Square. After the 2:30 mark, he can be seen eating tongue and brain at Attari Sandwich Shop, enjoying the frozen treats Saffron & Rose Ice Cream (so good he claims his “dick just got bigger” after the first bite), before closing out the night with some hookah at Habibi Cafe.

Part two brings local fusion god Roy Choi into the mix, taking Huang around East L.A. for tacos at Guisados. Huang freaks out on how good the tortillas are, while Roy, who reveals that he is still not eating meat, also goes on to share stories of his upbringing, and gives a bit of his food philosophy while chasing Guisados’ hot sauce down with some creamy and cooling horchata.

So sayeth the Papi Chulo: [emphasis ours]

“The last two generations of American kids… you wake up and you have fucking Pop Tarts. And then, at lunch, you have a fucking Hot Pocket. And then, you know, at dinner, you’re having fucking Hamburger Helper. And none of that shit is at a table. None of that shit is with other people. On a daily fucking basis, that shit is just fucking corrosive. […] I want to make food as cool as Monsters and Red Bulls and Pop Tarts […] so that way food is part of their life and they can make a choice.”

Part three wraps up with Huang having a meeting of the minds with members of the Techniques Car Club over some homemade BBQ. Huang compares notes with Redwood, the man on the grill, dropping tips about how he likes to marinate his short ribs in Dr. Pepper or cherry cola overnight before grilling.