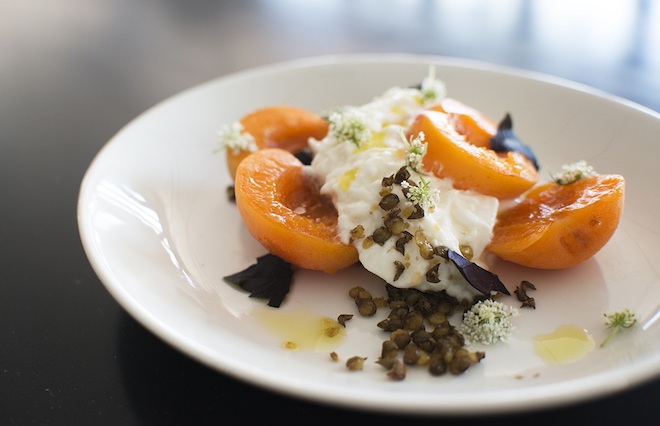 Girasol—which means sunflower in Spanish—is a new restaurant in Studio City that has Top Chef alum CJ Jacobson in the kitchen. It’s the first time Jacobson has worked the line, so to speak, since his days at The Yard in Santa Monica.

Not that the chef hasn’t been busy. Jacobson has been consulting at a few of restaurateur George Abou-Daoud’s concepts and also spent some time at Noma, in Copenhagen, training under lauded chef René Redzepi. At Girasol, he brings some of that training forward, with a SoCal touch. “We wanted to do something that the valley didn’t really have. My first thought was that there’s no good restaurants that are using the farmers’ markets here. But that’s the only way I cook—very much with the seasons. At the same time, we wanted to be somewhat approachable, because we wanted to be a neighborhood-y place,” says Jacobson, of Girasol’s concept.

The dish that Jacobson says most exemplifies his cooking at Girasol—and, more broadly, the way he’s cooking today—is his apricots, with burrata, crispy lentils, carrot flowers, and opal basil. “Obviously, everything is flowering right now, so I needed to make use of that, and then I went apricot tasting last week and Frog Hollow’s apricots are really singing right now. Then, the burrata kind of ties it together and the lentils add some crunch.” The dish was the first thing that sold out last night, opening night.

Girasol is now open for dinner nightly, with a wine and beer list; a cocktail menu is coming soon.