Home Architecture After 70 Years, the Norms Chain of Iconic Googie Diners Looks to... 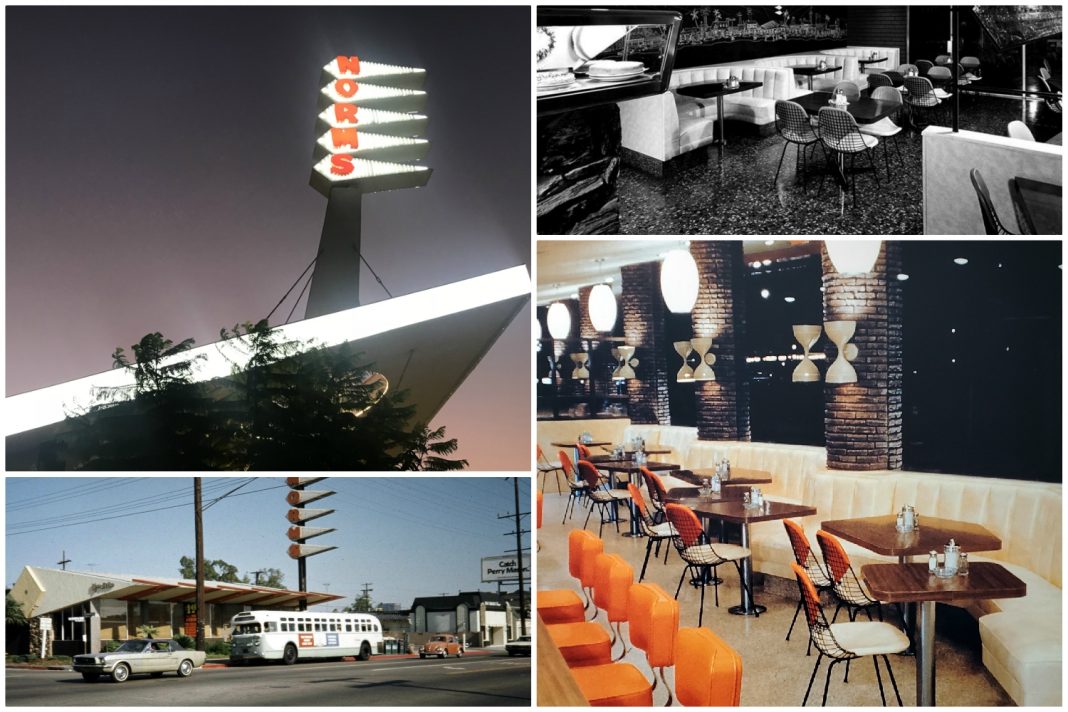 The neon at the latest Norms coffee shop is scheduled to flicker on for the first time this month at an eye-catching new location in Inglewood. The iconic restaurant chain is celebrating its 70th anniversary with new stores, new merchandise, and .70 cent breakfasts on October 23.

The home-grown diner is beloved as a 24-hour gathering spot and intergenerational common ground. “We cut across everything,” Norms president Mike Colonna says. “We have the blue collar workers, white collar workers with ties getting a quick lunch, ethnic diversity at every table. We get late-night millennials, and our base of baby boomers. We’re kind of retro cool and we think the Googie architecture is a big part of the brand.”

The Googiest of their Googie buildings, the chain’s flagship store on La Cienega Boulevard, is even getting a refresh. The company has brought back original architects Armet Davis Newlove, who designed the landmark in 1956. “We want to restore it the way it was, with the original colors and finishes,” says architect Victor Newlove, who has been with the firm for more than 50 years. “We’re not going to redo the seating except for upholstery and I would like to see the original terrazzo floor back.”

Googie coffee shops were meant to be deluxe. They were an evolutionary step beyond the diner. Armet & Davis spread the style nationwide with their prototypes for Denny’s and Big Boy restaurants. Historian Alan Hess described these establishments as places where “George Jetson and Fred Flintstone could meet over a cup of coffee.” In the 1950s a coffee shop could be high style, yet egalitarian. The original design for Norms La Cienega was radically space age and nestled in lush tropical landscaping with boulders, flagstone, and rock work. The restaurant featured custom-designed, site-specific artwork and even an illuminated modernist mural of nearby “Restaurant Row.” Mid-Century restaurants, furniture, and tract homes were all meant to create affordable elegance for the new middle class. Even today, the average check at Norms is $12.50. The operation of a Norms comes from elaborate time and motion studies in the 1950s that cut work with new technology, and equipment and design choices like cantilevered counter stools that made sweeping easier. Materials like stainless steel, mosaic tile, and flagstone look as good today as they did 60 years ago.

“We do big numbers on the holidays,” Says Colonna. “You think, ‘Why would you go to Norms on Mother’s Day?’ Our guests are middle income and hardworking. They can splurge and get a filet mignon and they don’t have to take out a payday loan. Our biggest day of the year is Thanksgiving.”

Customers panicked back in 2014 when the family of founder Norm Roybark put the business up for sale, and even more when the land the buildings sit on was sold separately. Locations in Santa Monica and Westwood closed (the company continues to scout for new locations nearby) and were demolished for development. The split sale caused even more concern when a real estate developer scooped up the La Cienega property with plans for a shopping center. Soon after the sale, the Los Angeles Conservancy and Councilmember Paul Koretz stepped in to help secure a future for the restaurant, which was declared a Historic-Cultural Monument in 2015. “Norms has committed to the location long term,” Colonna says. “We have an agreement with the landlord and plan to be in business for quite some time.”

Founder Norman Roybark was born in Los Angeles in 1909. His parents had emigrated from the Russian Empire five years earlier. Their shtetl was destroyed in a pogrom during the Russian Civil War. Norm attended Los Angeles High School and wanted to become an electrician. He skipped college and ended up waiting tables in a café. His older brother Sidney sold used cars. In their early 20s, the pair supported their parents and eight siblings who all lived together in a three-bedroom house in Jefferson Park. Norm followed his brother into auto sales, working 70 hours a week through the Great Depression with no vacations. Norm eventually opened his own car lot, then another. He was a well-known dealer (and racehorse gambler) when he took over a small building next to a car lot on the corner of Sunset and Morningside in Hollywood and transformed it into the first Norms.

Norm had a knack for attracting crowds to his car dealerships and he applied his expertise to his new venture. Armet & Davis were becoming known for their distinctive restaurant designs when he hired them to design another Norms at Figueroa and Manchester. That store incorporated all of the architectural elements that became the chain’s signatures: the extravagant roofline, the sawtooth sign, the exhibition kitchen that showed off the chefs and the plate glass windows that showed off the customers. The architects at Armet Davis Newlove, who have been designing restaurants since 1947, have said that the animated neon pennants on the Norms signs are reminiscent of the pennants that once flew over Roybark’s used car lots.

By the time Norms came to La Cienega, there were also locations in Culver City, Studio City, on Crenshaw, Century, and in Hollywood at Sunset and Vermont. There is a twin to La Cienega that’s still going strong on Slauson Avenue in Huntington Park. The company expanded and contracted through the ensuing decades, but last year Norms began an ambitious development program that will see their 19 stores joined by new ones every few months. This year it’s Inglewood, Encino, and Rialto. Next year: Northridge, Hollywood, and Ontario. Several are planned to be retro Googie-style coffee shops built from the ground up, while others are remodels of existing restaurants. “The countertop stays the same, the exposed kitchen stays the same,” says Colonna. “The angles and the signage really exemplify what this is all about.”

Norm Roybark had homes in Beverly Hills and Palm Springs when he died in 1969 at age 59. His family maintained Norms original concept for another 45 years. “We’re trying to keep the heritage as we move into the future,” Colonna says. “You have to be sure to evolve, but the fundamentals of good diner comfort food always stay the same.”