Home Uncategorized The NoMad Truck Is Serving One of Fanciest, Best Hot Dogs in... 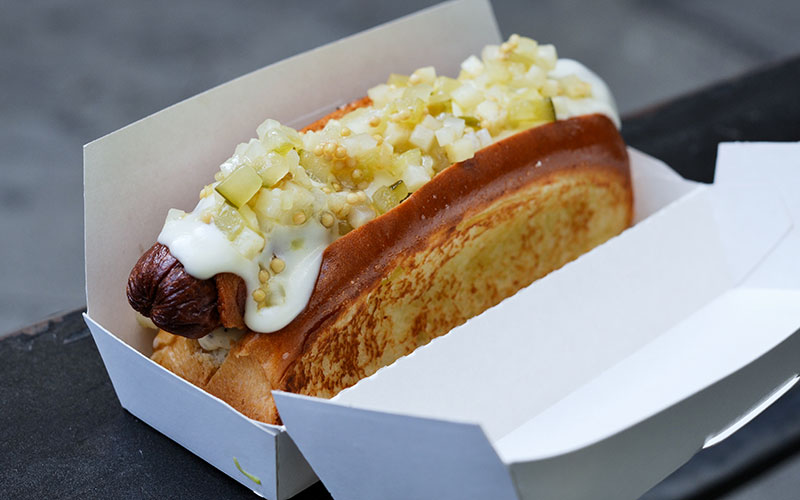 A few weeks ago, I happily sipped a sherry cocktail at the beautiful bar of the NoMad Hotel in New York. It’s only a matter of time until you get to do the same, as L.A.’s own NoMad is opening up downtown in 2017. But, before that happens, we get a taste of what’s to come via NoMad Truck, a roving pastel blue pop-up serving highlight dishes from the flagship’s menu. I was curious to see how the NoMad’s culinary team could translate its glamorous essence into a food truck, so I chased down the truck and ordered a fat chunk of the menu. Here’s what’s coming out of the mobile kitchen.

The Humm Dog tastes like a Polish dog wearing a tuxedo and is by far the most elegant phallic food you’ll eat this year. The bacon-wrapped meat is dense and flavorful, nestled inside a buttery brioche bun, topped with a creamy black truffle mayonnaise and crunchy celery root relish. In short, chef Daniel Humm’s namesake dog is where it’s at.

No qualms with these shoestring fries. They’re salty and flavorful thanks to rosemary and lemon involved. The fry is just right to give them the perfect amount of crispiness. Are they the best fries I’ve ever had? No, but they’re pretty damn good.

On the nose, The NoMad smelled fancy AF, and it tasted that way, too. Expletives came to mind after my first bite of the truffle mayo’d chicken burger. I had struck decadent gold, which is not something you expect to do when you’re standing on a gritty DTLA sidewalk.

You may wonder what in god’s name guacamole (or rather, mashed avocado) is doing in a cup full of thick-cut cucumbers. I wondered this too, but quickly understood after digging into the dish. The combination of textures and flavors, including the nutty quinoa, and a chive-flecked buttermilk sauce, worked really well together. This is more than your average side vegetable.

This month’s NoMad Truck chef collaborator, Roy Choi, put together a chicken “dumpling” burger with shrimp, chili, and ginger. The burger is definitely funky and interesting with a sesame kick and nice dark leafy greens, but the patty was dry and underwhelming.

Nothing like a little soft serve to take the edge off of a hot fall day in LA. The NoMad Truck’s soft serve is a honey-soaked dream. The sweetness may be overboard for some people, but if you can handle something like a Jeni’s Splendid scoop you’ll be in your element. Crunchy bits of sugary puffs and caramel top this super cold, super tasty dessert.