Home Uncategorized No More Free Coffee at the Original Pantry 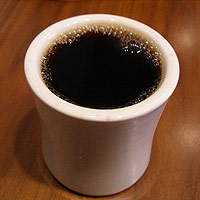 Share
Email
Facebook
Twitter
Pinterest
ReddIt
I’m currently in the final throes of putting together our giant  “Breakfast In L.A.” package for the September issue. (Get ready guys! Hope you like eggs—and pancakes, and bacon, and congee.) With morning meals on the brain, this little tidbit caught my eye today in the L.A. Times. The Original Pantry, run by our own former mayor Richard Riordan, has stopped its practice of serving free coffee in the morning—something it has been generously doing since 1924. Instead, they’ll charge 50 cents a cup with a breakfast purchase.

Folks flinch whenever any place really, really old changes the drapery, let alone the prices. I recently spoke with third-generation Nate ‘n Al owners, brothers Mark and David Mendelson, who last month debuted a new menu (all bound and laminated—ooo!) with adjusted prices. They were worried about how the clientele would react; when they tried to change to the fancy Neuske’s bacon, customers rebelled and they were forced to go back to their standard brand. But so far, no riots.

My reaction to the Pantry’s policy change is similar to that of Alonzo Edmundo, a regular customer quoted in the Times:

“Am I outraged? No. For almost 90 years this has been an awesome place. If they need an extra 50 cents to help keep the doors open, that’s OK with me.”

And hey, maybe those extra couple of quarters can be reinvested in the food quality? Eh? Just a thought.