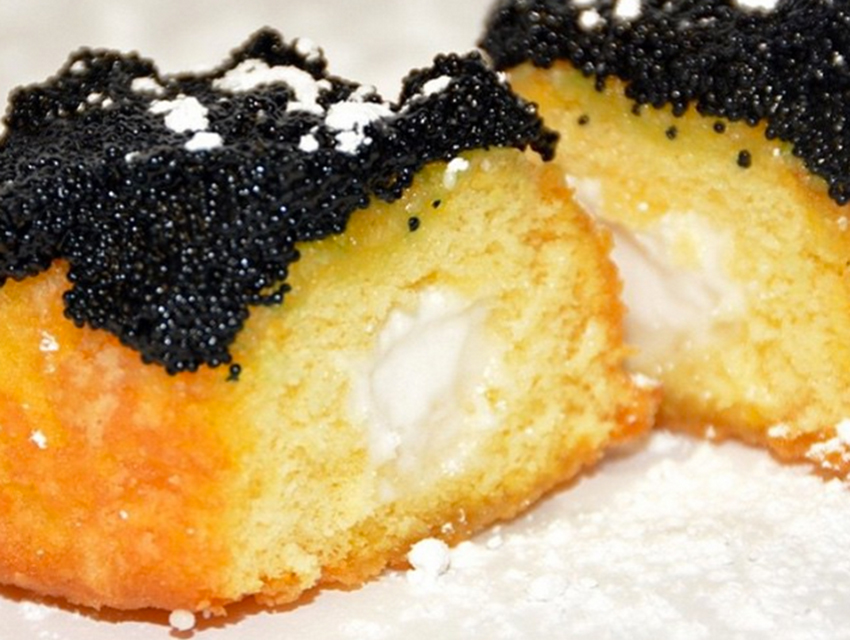 We Angelenos tend to think of Orange County as a hotbed of freeway-adjacent chain restaurants with all-day margarita happy hours, sprawling gated communities that cater to the nouveau riche, and 10 seasons of Real Housewives slamming white wine and getting belligerent on camera. But there’s one cultural bastion that the O.C. just might be able to lord over L.A.: The county fair.

The O.C. Fair predates the L.A. County Fair by 32 years, and, as such, has had the time to develop a rich lineup of agricultural exhibits, artisanal markets, and—most importantly—a menu of deep-fried, bacon-wrapped calorie bombs that leave 1.3-million annual visitors scrambling for their wallets.

If you want to get your hands on the good stuff this year, make the trek down to L.A.’s sister to the south between July 17 and August 16 and check out these nine insane, fair-exclusive delicacies.

Caviar-Topped Twinkie
To celebrate the O.C. Fair’s 125th anniversary, Chicken Charlie’s, the undisputed king of all things deep-fried, will be selling its caviar-topped Twinkie for $125. But, before you decry this as the ultimate display of American opulence, know that 100 percent of the proceeds will go to the Children’s Hospital of Orange County.

Bacon-Wrapped Pork Belly
In what definitely should have been named “Baconception,” Biggy’s—a booth known for its massive meat portions—is wrapping pork belly cubes in a half pound of bacon and serving the whole thing on a stick.

Fried Coffee
In keeping with the breakfast theme, the masterminds behind the Bacon A-Fair booth are stuffing dough balls full of Starbucks espresso grounds and chocolate chips, then deep-frying the caffeine-infused confection in a mixture of oil and bacon fat.

Fried Corn on the Cob
The folks from the Wild Hog booth are taking the term “corn dog” literally. A full cob of corn is jammed on a stick, dunked in cornmeal batter, and given a bath in hot oil.

Krispy Kreme Triple Cheeseburger
Chicken Charlie is tripling down on the donut-burger craze in a gut-busting way.

Fried Pizza
Shockingly enough, this is the first time fried pizza has reared its greasy head at the Orange County fair. The Apple Fries booth is dredging a slice of pepperoni pizza in egg wash, dusting it in flour, then flash-frying it for that extra crunch.

Fried Apple Rings
Since the O.C. Fair is also about featuring the great produce and local farmers of the area, it only makes sense that the folks at the Chuckwagon booth would take a beautifully cultivated apple, batter it, fry it, and dust it with cinnamon sugar.