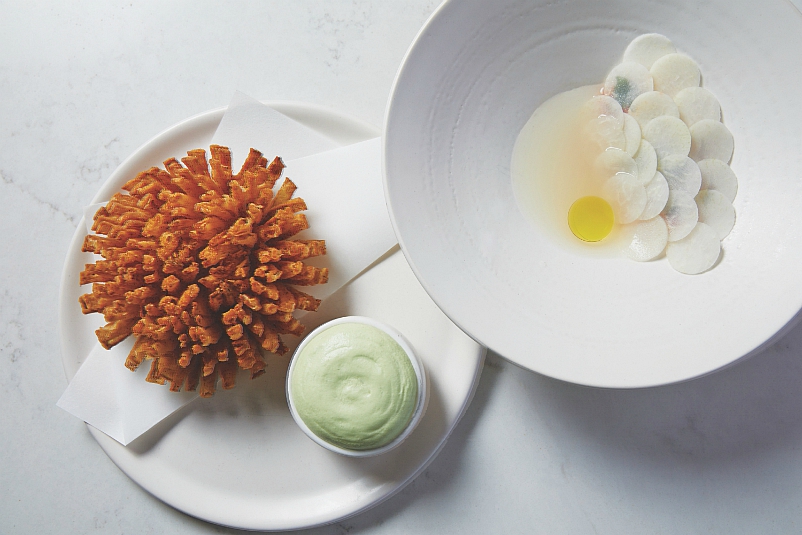 Consider the blooming onion. Over the years the calorie bomb-cum-appetizer has become shorthand for the dopey decadence of American chain restaurants. But at Nightshade, the Arts District restaurant from Top Chef winner Mei Lin, the petaled allium is given a makeover so unexpected it feels transgressive: fried to an ethereal crunch, coated with a shake of dehydrated tom yum powder (it tastes like the seasoning on Tostitos Hint of Lime chips), and served with an airy ranch stand-in made from whipped coconut cream.

Lin, born in China and raised in Michigan, knows how to subvert expectations. She did it as head sous chef at ink., the now-shuttered restaurant run by fellow Top Chef vet Michael Voltaggio, and during her stint on television, where she wowed judges with carnitas-topped congee. Likewise, her long-awaited solo restaurant, opened in partnership with hospitality newcomers Cyrus Batchan and Francis Miranda and hidden along the loading dock of a warehouse-turned-loft, seems engineered to upend convention. Sure, there’s blonde wood, white brick and hanging plants in the dining room, cheery touches of Marie Kondo-approved minimalism, but dim low-slung lamps create a serious aura at night.

Like Voltaggio’s cooking at ink., the playfulness of Nightshade’s food belies the steely precision that underpins it. A gorgeous crudo of kimchi-marinated kanpachi, steeped in pickled radish broth, recalls, in the subtlest of ways, Korean cold noodles at peak summer. Plump baby tomatoes are relieved of their skins, a trick that lets them soak in a puckery sesame dressing. Lin is far from the first chef to put her spin on shrimp toast (served in fragrant yellow curry) or hot chicken (shaggy fried quail coated in searing Sichuan spices), but both riffs speak to a fresh perspective.

Then there’s that congee, presented in a pale pink bowl with a color wheel of toppings: anchovy-laced X.O. sauce, dried pork floss, crispy shallots, scallions, and an oozing onsen egg. It’s a final comforting foil to chef de cuisine Max Boonthanakit’s wildly provocative desserts, MOCA-esque compositions that involve frozen mandarin saucers and matcha-dusted orbs (they’re so muted in sweetness, the cocktails provide more of a sugar rush). Already one of the year’s most captivating debuts, Nightshade isn’t shy about flexing its creative muscles—it just knows how to have more fun doing it.

RELATED: These 4 Chefs Have Restaurants Coming in 2019 and We Can’t Wait