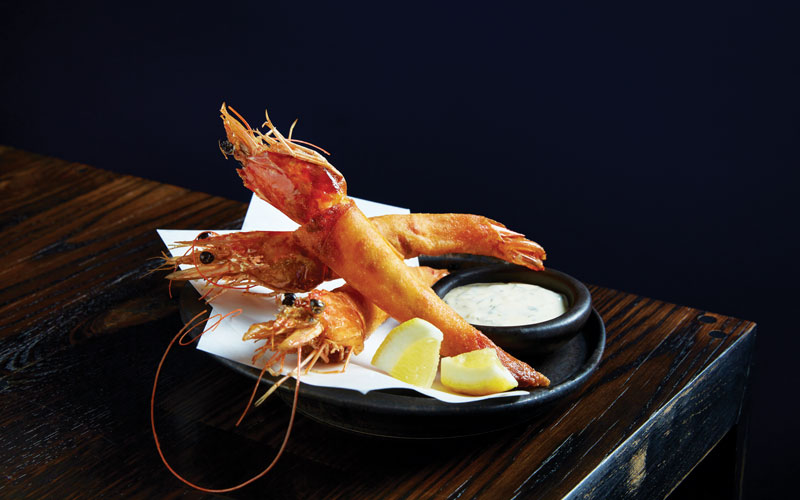 When drinking sake at one of L.A.’s more highfalutin Japanese restaurants, you might be offered a selection of small sipping cups to choose from. It always reminds me of that scene in Indiana Jones and the Last Crusade, where Jones has to pick the Holy Grail from a dusty menagerie of cups. “Choose wisely,” says the knight to a grizzled Harrison Ford. He does.

At Tsubaki, Echo Park’s new modern izakaya, sake drinkers are presented with a dozen or so cups from which to sample the restaurant’s smart list of 25 bottles. This is an arty crowd, and the vessels have the thick rims and earthy glazes of contemporary pottery. It’s a lot of ceremony for a place that’s across the street from a booze-slinging arcade (Button Mash), but I get the sense that the owners aren’t taking things too seriously—just seriously enough.

Tsubaki co-owners Charles Namba and Courtney Kaplan are food industry veterans. He cooked his way through Japanese and French kitchens in New York and L.A., including Bouchon in Beverly Hills, and she helped steward the wine programs at Bestia and the cutting-edge shop Domaine L.A. Their combined experience is palpable in the tiniest details: the barely suspended egg yolk at the center of six identically charred tsukune; the hint of sake marinade in a terrine of foie gras; that sake cup thing.

Izakaya food is meant for drinking, but there’s a subtlety to some of Namba’s dishes—chawanmushi egg custard with Dungeness crab, the raw Tasmanian ocean trout with salmon roe—that might be lost after the first few pours. For more liberal swilling there’s binchotan charcoal-grilled octopus draped with charred shishitos and a Southern spin on karaage, or fried chicken, that’s soaked in buttermilk and served with honey vinegar.

At the end of a busy Tuesday night, when only a few tables remain, Kaplan comes by with another cup—this one full of plum wine. It’s the precious last drops of a recipe she began experimenting with last fall, and she hands it over with a smile. I’m confident that the gang at Tsubaki will still be here, toasting more successful nights, when the next batch is ready a year from now.

The Komodo crew channels its Indonesian heritage with a sleek restaurant dedicated to beef-bone broth and chewy hand-cut noodles. Shareable meaty additions include a Flintstones-esque beef rib, oxtails, and golden Jidori chicken. The spicy pile of mie goreng pedas—fried noodles with a sous vide egg—might seem like overkill. It’s not.

Orient-Express blue and English mustard yellow murals are outside; taupe banquettes and art deco fixtures rule the dining room. In this elegant garden spot that was once Terrine, Scott Conant practices a nuanced version of supper club Italian, where vongole balance on squid ink tagliolini and a robust rabe pesto lends a jolt to plump veal polpette.

At the first American branch of this Chinese chain, the signature Sichuan heat is more subtle than at some of the SGV’s other peppercorn palaces. An 11-course $45 chef’s tasting menu offers small parties a chance to dive deep, with fish swimming in fiery red oil, slow-cooked pork belly, dessert (a panda-shaped black sesame rice ball), and a view of the San Gabriels.