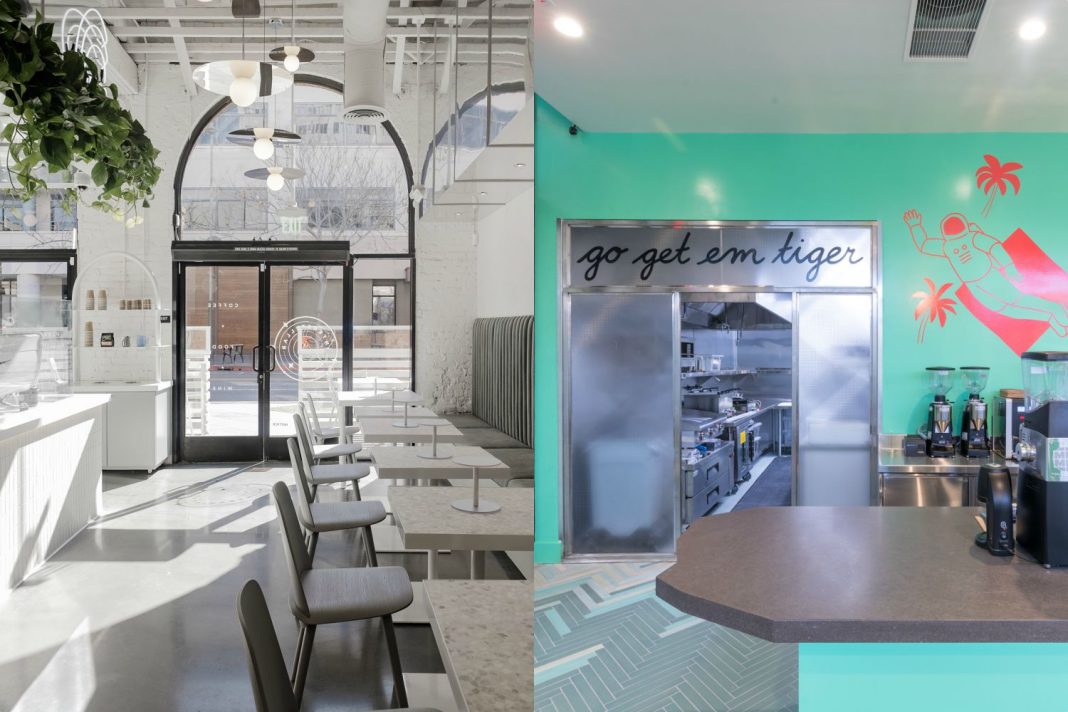 The build-out was complete. Staff had been hired and trained. The kitchen was stocked. The opening party was on the calendar. Everything was in place for Go Get Em Tiger to debut its Culver City café in late March—until Los Angeles Mayor Eric Garcetti and his fellow local mayors ordered that all bars and restaurants shutter for dine-in service in mid-March.

After considering their options, the company’s cofounders, Kyle Glanville and Charles Babinski, decided to open rather than lay off the workers. “It seemed like a very low-risk thing,” says Glanville. “I personally enjoy opportunities to go against the flow of things.”

Customers can order coffee drinks, salads, sandwiches, and pantry items via an app for contact-free pickup outside the shop. The Culver City location is bringing in roughly 30 percent less business than had been projected before the pandemic. Nevertheless, “it’s actually doing pretty well and justifying its existence,” says Glanville.

While many L.A.-area restaurants have closed completely amid the quarantine, a few newbies have opened during this trying time, joining the ranks of older spots offering takeout and delivery.

After long dreaming of opening their own restaurant, Angie and Daniel Kim debuted their all-day Santa Monica café, Interstellar, on April 7. They had debated whether to go forward, but with an understanding landlord and supportive investors, they decided to go for it. “A really big concern for us was our employees,” says Angie, adding that they’ve been able to keep two kitchen staffers working. “We’re not really trying to make a profit at this point.”

The Kims had to rapidly adjust the menu, adding items like a DIY affogato kit, and figure out how to package dishes like seared branzino with dashi broth to go.

They’ve also recalibrated their expectations. With the café near the beach and several hotels, the young couple had planned on heavy foot traffic to drive business. “Some days it’s really slow,” says Angie. “It does make me feel a bit anxious.”

For new businesses that always intended to be delivery-only, the shutdown has been easier but not without its challenges. After a year developing a special cauliflower rice for his sushi, Ei Hiroyoshi, former chef at Sasabune Beverly Hills, proceeded with the launch of his low-carb sushi ghost-kitchen concept, Skinny Fish, in mid-April. His brand strategy partner Anna Drabik says they see a market in the current moment. “We ultimately decided that people needed to step away from the pasta so we wanted to give them the option,” she says.

But Hiroyoshi admits business is “not booming crazy yet.”

Things are booming for Krispy Rice, another new delivery-only sushi concept, albeit with more carbs. Chef Martin Heierling, who oversees culinary operations for Krispy Rice’s parent company, SBE, says business is more than triple what they anticipated. “It creates some issues because we did not plan for the amount of packaging we’d need,” he says. “We’re not celebrating. … Hopefully the shutdown is going to end sooner than later.”