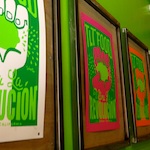 Hollywood: The Know Where, a new bar on Hollywood near Wilton, has been serving since late August, reports Eater L.A. It’s from designer Ben Adams, who’s better known for his work at the Chateau Marmont. Though food is not yet available, a menu of bar bites will be introduced next week. » The Know Where, 5634 Hollywood Blvd., Hollywood, 323-217-6560.