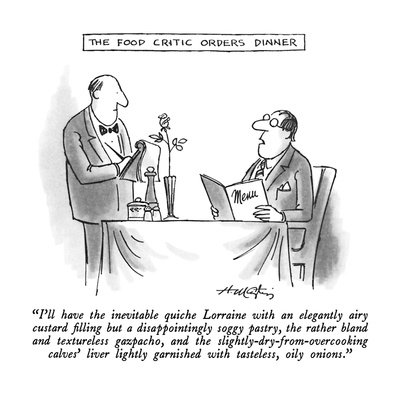 Today, the Association of Food Journalists put out a new set of guidelines for food writers and critics. Full disclosure: this post on Grub Street San Francisco is the first we’ve heard of this organization, which appears to hand out awards only to newspapers and their writers.

Since 1986, the AFJ has sought to be the go-to source for food writers and journalists. Though they are based in North Carolina, their board of directors lives across the country and is comprised of current and former food writers and editors.

The AFJ’s previous set of guidelines insisted that food criticism be done anonymously or not at all. Today’s revision to the rules includes an understanding of the fast pace of internet news and blogging, and tips on how food writers can compete while still following a journalist’s code of ethics. The new rules also acknowledge the difficulty of staying anonymous in this, the age of the smart phone camera.

Besides basics like not using their own name, paying in full for their meal, and visiting a restaurant multiple times in order to taste as many dishes as possible, here are a few other highlights from the new guidelines for restaurant critics:

“Reviews should be conducted as anonymously as possible… However, true anonymity is often no longer possible. In that case, critics should engage in the practice of anonymity. Ideally, that means keeping all photos and social-media profiles photo-free and restricting public appearances.”

“Installing caller ID blocking on one’s phone, maintaining a separate email account for communication with the restaurant, and maintaining one or more identities on restaurant-reservation sites is recommended.“

“If a restaurant critic is recognized, or accompanied by a person known to the kitchen, and the restaurant sends over free food, request that the cost of the items be added to the check. If such an incident occurs, it should be acknowledged in the review.”

Naturally, we reached out to our own restaurant critic, Patric Kuh, for his take on the rules. Though he acknowledges that we live in “complicated times,” Kuh says he agrees with the suggestions and abides by them (and others, as set forth by Los Angeles magazine, which are meant to protect his anonymity, allow him to avoid bias, and effectively complete his task). On anonymity, Kuh says, “Of course, I have been recognized, but that’s why it’s really important to pay for everything that you eat.”

On the other hand, this can get pricey for a blogger: “…when I see a picture of a blogger with their arm draped around the shoulder of the chef whose restaurant they are reviewing, I wonder how they can call it a review. Some bloggers hit it right… but that, I imagine requires a lot of money. Many others seem compromised in some way or other.”