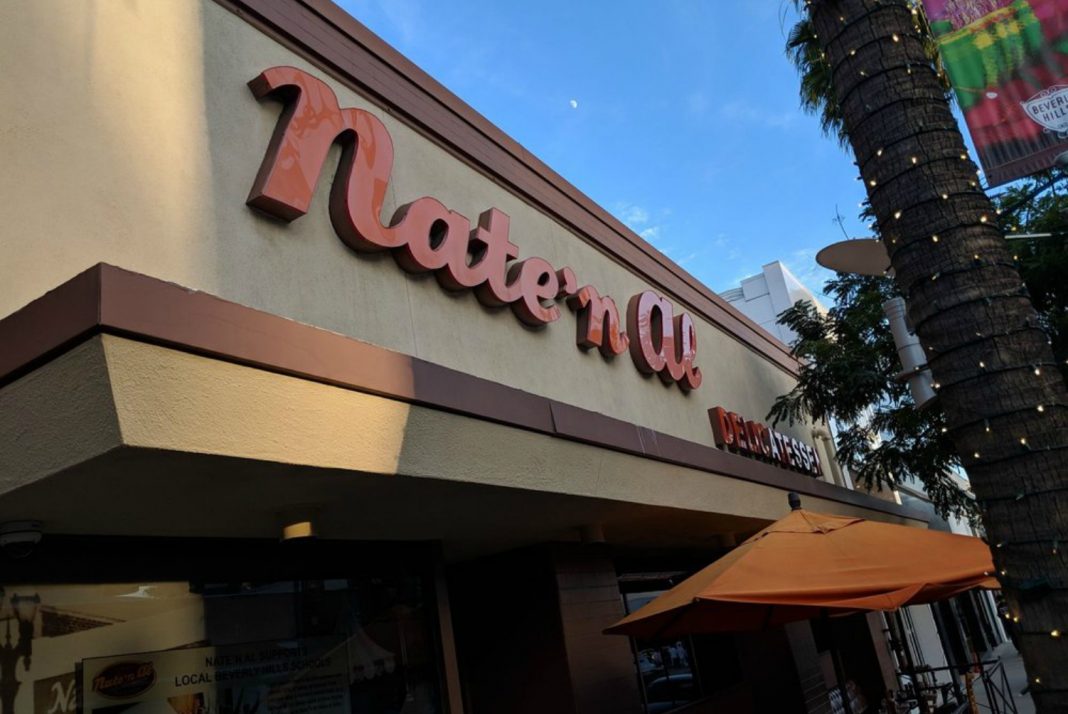 As L.A. eateries continue to be limited to take-out and delivery service, at least through April 19, 75-year-old Beverly Hills deli Nate ‘n Al’s is closing up shop—but that doesn’t necessarily mean it’s going away for good.

An ominous Instagram post and reports that the institution was closing “possibly forever” on Sunday, March 29, resulted in an outpouring of grief from longtime customers. One lost soul commented: “This is not good. What are we gonna do? Nothing compares.”

On Sunday, a follow-up Instagram post from Nate ‘n Al’s management indicated that while rumors of the restaurant’s permanent demise amid the coronavirus outbreak may have been exaggerated—”The media has incorrectly reported that Nate ‘n Al’s is ‘gone forever,'” the post says—issues with the restaurant’s lease and pending relocation may be the real crisis to overcome.

The post continues: “As we originally stated, we couldn’t fully guarantee the safety of both our customers and employees for take-out and delivery during this pandemic. We have chosen to cease that service. Our current lease is expiring shortly and we have encountered major difficulties with the city of Beverly Hills, who would have been our new landlord on Canon Drive. It is the intention of the current ownership to get through this crisis like every restaurant and make the right decisions at the right time. Our goal is to keep Nate’n Al’s tradition alive.”

The restaurant, which has been in its current location for 75 years, was planning to relocate to the Canon Drive space that was the home of Wolfgang’s Steakhouse. Nate ’n Al’s was sold in 2018 by the Mendelson brothers, descendants of the founder Al, to entertainment business mogul Irving Azoff and his wife Shelli, along with Rande Gerber and Cindy Crawford, and other entertainment bigwigs, who decided to relocate it due to the Beverly Drive space being sold. (Irving and Shelli Azoff also purchased another L.A. iconic traditional restaurant, the Apple Pan, at the same time.)

Azoff and friends were eager to keep the deli alive in large part because of its beloved staff, which many industry types have grown close to over the years and who’ve helped carry on a Hollywood tradition. The late mogul Bernie Brillstein, who founded Brillstein Entertainment and managed John Belushi, paid for a lot of his favorite waitress’ medical bills. It was long the hangout of Tony Curtis, Neil Simon, Stan Lee, Sammy Davis Jr., Lew Wasserman, Larry King, and TV producer/director George Schlatter (Rowan & Martin’s Laugh-In). Henry Winkler recently told The Hollywood Reporter that his wife Stacey took him there for the first time, and they proceeded to take their kids and later their grandkids their. His longtime waitress, Gloria Leon, told THR she’s worked at Nate’n Al’s for 41 years, and that her first customer was Rat Pack member Joey Bishop.

As of now, it appears the deal to move into the old Wolfgang’s space has fallen through. And it’s pretty clear the restaurant business in L.A. is in a tenuous position, at least until the pandemic starts to subside and people get back to work.

Will Nate ‘n Al’s in fact return? It’s unlikely we’ll know the answer to that question for some months. In the meantime, deli lovers will have to get their bagels, lox, and cream cheese somewhere else.