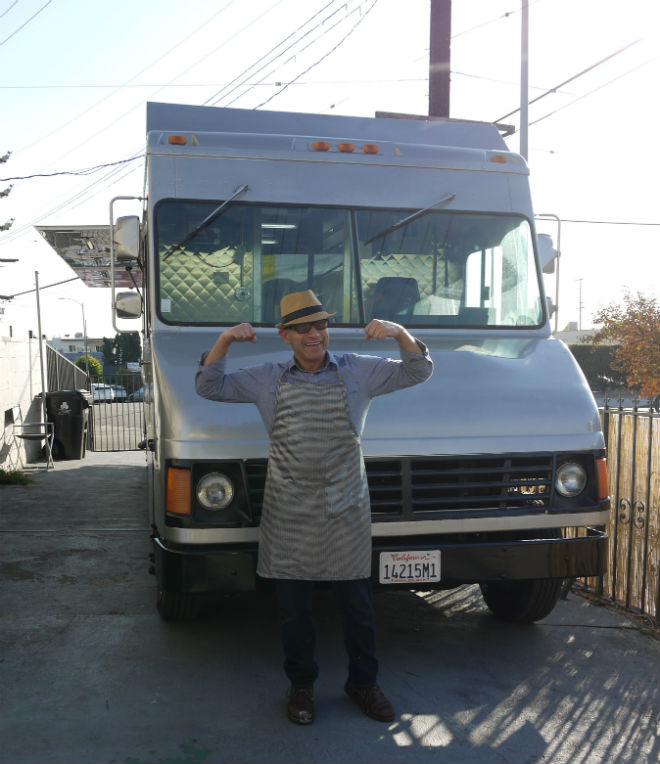 I don’t always eat fish tacos, but when I do… It’s true, I’m fortunate enough to find myself in Ensenada every couple of months, where I get to enjoy the best fish tacos on the planet from a handful of urban seafood shacks. But, when I get the urge for a fish taco in L.A., it can only be satisfied by a stop at Ricky’s Fish Tacos.

Just five days before Christmas I received my first present (no it wasn’t five golden rings): a pair of fish tacos, and one shrimp taco from the newly christened Ricky’s Fish Tacos—a shiny, hulking silver catering truck. This has been a long time coming for Ensenada native owner Ricky Piña, whose meticulous attention to the basic ingredients, and the preparation of his famous Baja-style fish tacos has earned him national recognition. Despite the accolades and huge following, Piña has had to move around a lot in order to operate—and at times, has had to shut down—since street vending in L.A. is still illegal.

Now that he has the truck, and has received his health permit, there’s no stopping L.A.’s top fish taco specialist. Rain or shine, Ricky’s Fish Tacos will be available at 1400 N. Virgil, from Thursday through Sunday. Soon, he will be setting up six days a week.

The only competition Piña has is himself, and it’s only in the sense that he needs to perfect his recipes on his new equipment. He notes that “the fish sticks to the bottom of the basket in the new deep fryers”—he’s had to make some adjustments, as the conventional fryers don’t behave in the same way as the traditional aluminum discs that Piña was using at his stand. Most won’t notice, but Piña himself won’t rest until his tacos are perfect.

I ordered a pair of fish tacos, and one full of plump, fried shrimp. I put my own cream and hot sauce on top, to add an extra sensation of being in Ensenada, where customers get to finish their tacos and choose their own condiments.

The Ricky’s Fish Tacos truck means that that I can count on the best fish tacos in L.A. this coming year—without worrying about the po-po taking them away.

4 Ways to Get Your Fish Taco Fix in L.A.