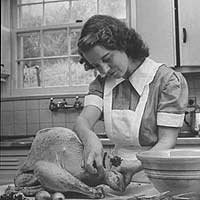 I’m hosting my own Thanksgiving for the first time this year. (Read part 1 if you want to know why.) It’s intended to be a sort of foster meal for any holiday orphans who can’t make it home, as well as a vain excuse to put my hostess chops on full display (of course). So far, I’ve secured the turkey, the tablecloth (a vintage, Eastern-European number shipped directly from my mom’s linen cupboard), and the guest list (growing every day, but last I checked, 12). The menu, however, is still up in the air. I’ve asked that anyone who wishes should make something that reminds them of their family’s Thanksgiving meal. For my friend Tomas, that means mashed potatoes done the way he likes them. For my pal Allison from Omaha, that means something she calls the “Caserrole,” which involves green beans and Velveeta. (As the wife of a Texan, I’m more than familiar with the hedonistic pleasures of processed cheese.) My friend Tom is baking a pie his mom used to make.

That leaves me with quite a few dishes on my to-do list, the most important of which is the stuffing—or “dressing,” depending on where you’re from. Where I’m from it’s stuffing, and it comes from a box with the words Stove Top on it. And while I’m encouraging everyone else to make a nostalgic dish, I’ll be thinking outside the box with this one.

The first question: To stuff or not to stuff? My family always stuffed the turkey and then cooked another batch on the side for folks who prefer their stuffing drier or without the risk of food borne illness. I always ate the portion that came from the bird. It has so much more flavor, not to mention fat, and my big sister always refused to eat it, which made it all the more enticing. But as I’ve been doing some research I’ve realized that while the stuffing may come out better, the turkey itself can suffer from being stuffed. I’m already a little nervous about tales of heritage birds cooking differently than standard turkeys. The idea that stuffing the bird may further affect cooking time has me thinking twice. So this year, with no sister to rebel against, I’ve decided to cook my dressing on the side. Hopefully my homemade chicken stock will help make up for the lack of cavity contact.

As for the recipe, there are several different stuffing philosophies: Sweet, savory, with meat, or with seafood. Savory is the classic move, usually featuring cubes of white bread, loads of sage, celery, and mushrooms. The sweet school often throws in a cornbread base and adds dried fruits, nuts, and citrus. I’m sure it’s delicious, but the thought of oysters in my stuffing sounds either expensive if they’re fresh, or gross if they’re canned. As for meat, I once brought up the idea of a sausage stuffing to my mom, but was met with, “Isn’t that a bit rich?” ‘Nuff said.

After scouring more than a few recipes online, I’ve decided to develop my own formula: Half cornbread half white bread stuffing with sausage, fennel, dried cranberries and pecans with my homemade chicken stock. Why fennel? Because I love it, especially with sausage. And because my mom isn’t here to talk me out of it.

Want to talk me out of it? I’m taking any and all stuffing suggestions at [email protected]

Still to come: the wine, the table, and the brine. Oh my!