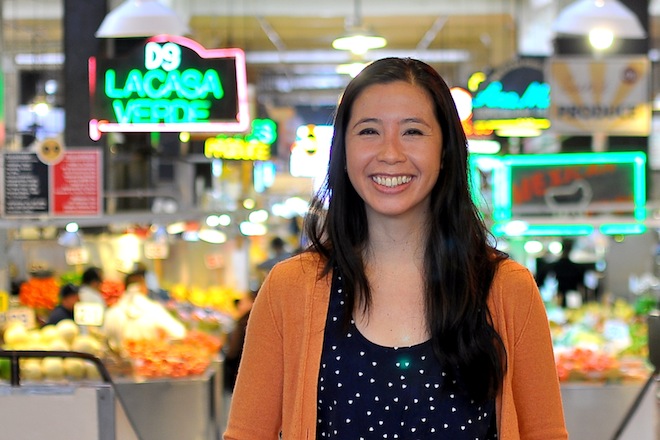 I’m almost embarrassed to admit that I’ve only been reading Cathy Chaplin’s Gastronomy Blog for a year. It’s where Chaplin, a native Californian, has documented her dining excursions throughout L.A. and beyond since 2006. Her enthusiasm for food and culture coupled with a knack for getting to the crux of every dish’s raison d’etre has led me to comb through the site’s archives in an effort to catch up. It’s no wonder a publisher picked her to lead us on a tour of this city, which, if we’re being honest, thinks first with its stomach.

Buckle up, the Food Lovers’ Guide to Los Angeles includes over 300 pages of recommendations, reviews, and recipes. Set to be released on Tuesday, December 17, it’s my guide to dining out in L.A. in 2014.

As a teaser, we asked Chaplin to share her 10 must-eats in L.A. right now. Here’s her list:

① Noodle Boy, Rosemead
From the bounce of the noodles to the spring of the wontons, it’s clear that there is an expert behind the stoves. Order the wonton noodle soup, which comes with four wontons chock-full of shrimp and a choice of egg noodles, wide rice noodles, or thin vermicelli.
② Mumbai Ki Galliyon Se, Artesia
This is the only restaurant in Los Angeles specializing in the street foods of Mumbai. The completely vegetarian menu lists close to 100 dishes including specialties from South India and Punjab, and even Indochinese fusion. Order the dabeli, a slider of sorts stuffed with potato patties laced with masala (a spicy mix of chilies, cumin, and cinnamon), onions, green grapes, peanuts, and pomegranate seeds in between buttered and toasted buns.
③ The Serving Spoon, Inglewood
A full-service diner serving Southern classics in a brightly lit and energetic room. Cookie’s Wings & Waffle features well-seasoned chicken, expertly fried and outstandingly juicy, served with a cinnamon-dusted waffle that hits an intriguing savory note. The flavors here are rounded and harmonious—a thrilling combination of sweet, salty, and umami.
④ Bestia, Downtown
Everything about Bestia—the food, theenergy, the room, the service—is simply the best.Every dinner here should start with an order of the Ventrigli di Pollo Rosolati, also known as the tenderest chicken gizzards known to man. Pan-roasted and paired with roasted beets, Belgian endive, and aged capra sarda cheese, the ventrigli are like no other gizzards in town.
⑤ Pho Filet, South El Monte
While the filet mignon that comes standardwith every bowl is a cut above the rest, it’s Linh Phuong Nguyen’s unparalleled broth that distinguishes her product from the dozens of pho hawkers in town. Beef bones are carefully simmered to yield a rich broth that is as clear as it is flavorful. An underlying sweetness, as well as a rush of cinnamon and anise, adds further complexity to the soup.
⑥ Ma Dang Gook Soo, Koreatown
Comfort cuisine reigns supreme at this charming den of Korean home cooking.The most alluring dish on the menu is the namesake kal gook soo, steaming bowls of knife-cut noodles served in a chicken, clam, anchovy, or kimchi (fermented cabbage) broth. The soup’s subdued flavors allow for the irregularly edged and toothsome noodles to soak up the spotlight.
⑦ Patisserie Chantilly, Lomita
ChefKeiko Nojima’s French pastries with a Japanese flair are nothing shortof spectacular. While every dessert lining the pastry counter is impeccable, it’s the black sesame cream puff that really hits it out of the ballpark. Each one is filled to order with black sesame-flavored whipped cream, drizzled with honey, and sprinkled with soy powder. The intense and pure flavor that Chef Nojima is able to extract from the black sesame seeds is incredible.
⑧ Old Sasoon Bakery, Pasadena
The first thing you’ll notice when walkinginto the store is just how good the place smells. Freshly baked breadsand pastries perfume the air both inside and outside the shop. Theambiance is homey, yet efficient. On your first visit to Old Sasoon, come and order the khachapuri, a Georgian breakfast staple composedof a boat-shaped flatbread topped with a blend of cheeses, one or tworunny eggs, and a few pats of melted butter (an original Sasoon touch).
⑨ Lucky Noodle King, San Gabriel
No one executes the regional specialties ofSichuan quite like this spot, home to the best dan dan mian in town. Each bowl is mounded with fresh noodles and ground seasoned pork. A biting yet creamy sauce ties everything together, making the dan dan noodles here an event.
⑩ Cemitas Poblanas Don Adrian, Van Nuys
It takes a massive jaw anda serious appetite to conquer a cemita poblana, a beast of a sandwichconstructed from a plush sesame roll jam-packed with ripe avocados,panela cheese, Oaxacan string cheese, salsa, onions, and meat. While the beef milanesa, a thinly pounded and deep-friedhunk of carne, is the most traditional filling, there’s also house-madequeso de puerco (pork head cheese), pata de res (pickled beef tendons),and even salmon to properly stuff your cemita.