Home Music L.A. Music Venues Where You Can Actually Get Something Decent to Eat 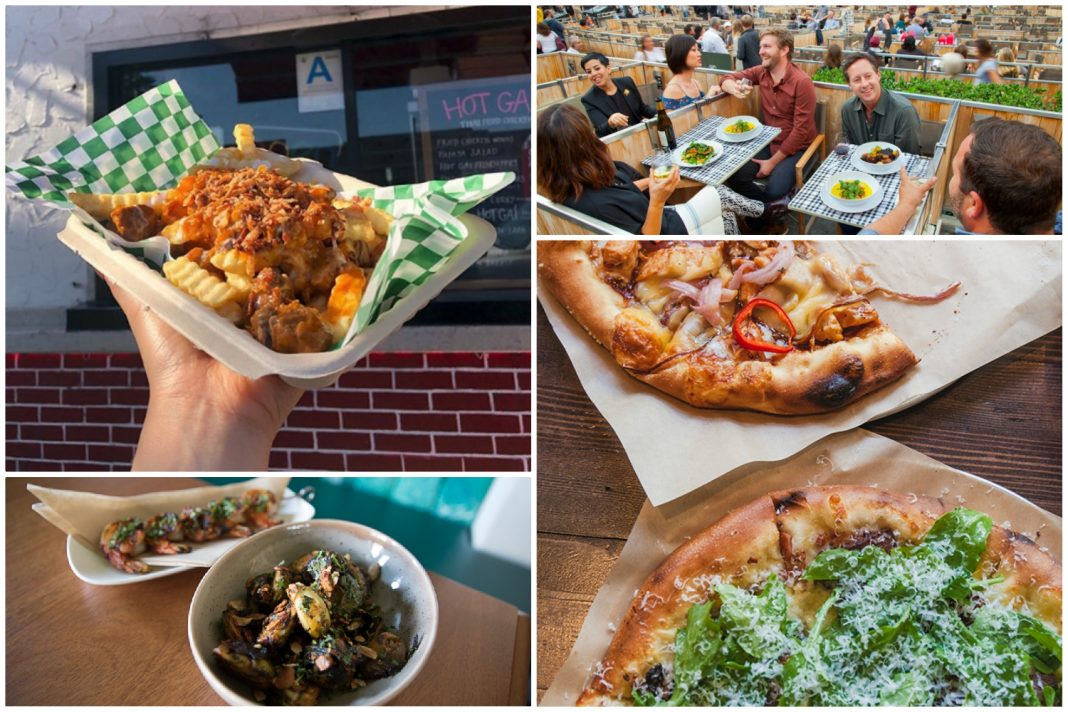 If you’re accustomed to regularly eating dinner, going to a show on a weeknight can really complicate matters. Work is about to let out and you have an hour to drive across town in rush-hour traffic to make it in time for doors. Will you sacrifice a spot up front or miss the opening band’s set for much-needed nourishment? That’s not very punk rock, but for the avid concertgoer, the dilemma can ruin what might’ve been a perfectly nice evening. Many music venues don’t serve more than bags of chips and packets of nuts that have been dangling behind the bar since the early aughts, but some L.A. venues have full kitchens churning out food that’s as much of a headliner as the talent itself.

On the second story of an old Masonic temple in Highland Park, you’ll find one of L.A.’s most exciting new music venues. The vintage space has been updated and upgraded to accommodate a truly unique show-going experience. Just next door to the main room is its food counterpart, Checker Hall, a neighborhood restaurant serving homey Mediterranean fare. You and your concert crew can dive into an array of shareable plates—shishito peppers, Brussels sprouts, meat skewers, and the much-loved borek, a puff pastry stuffed with chives, garlic, and specialty cheeses. There are salads too, like the roasted beet, and main courses that range from the lamb shank with pomegranate molasses to the Daurade fish, an exotic dish that exists nowhere else in the city. 104 N. Ave 56, 2nd Floor, Highland Park.

Brooklyn transplant Zebulon has cemented itself as one of the the city’s most contemporary-cool hotspots. Situated snugly within the scene in Frogtown, the space maintains an adventurous calendar of bookings that runs the gamut from world music and indie to synthpop and experimental noise rock. Boisterous DJ nights may keep people dancing till last call, but the hangout’s kitchen will keep famished partiers sustained until 11 p.m., which isn’t too shabby. Zebulon’s dinner menu highlights an assortment of small plates: meats and cheeses, roasted cauliflower with sunchokes, baba ghanoush, and charred tomato with chickpeas and an olive tapenade. The weekend brunch menu is available from 11 a.m. till 4 p.m. and coincides with daytime programming. Traditional highlights include shakshuka, steak frites with eggs, croque madame, and smoked salmon tartine. 2478 Fletcher Dr., Elysian Valley.

Opened on 7th Street since 2015, Teragram Ballroom is the West Coast effort from the team behind Manhattan’s Bowery Ballroom and Mercury Lounge, and it’s known to host everything from reunited legacy acts to this year’s breakout artists. In the lobby you’ll find Café Teragram, a cozy restaurant with table and counter seating serving a “concert menu” of bar food faves like quesadillas, mozzarella sticks, grilled cheese, and a signature burger. No more hunger pangs during the encore. It won’t do you much good on a show night, but the café is also open for brunch and lunch every day except for Monday, from 9 a.m. to 3 p.m. 1234 W. 7th St., Westlake.

The Bowl, one of our city’s most majestic and historic venues, isn’t only the ideal setting for music of any genre, but the food tastes better there, too. Show up early to share a meal at one of the site’s 14 scenic picnicking areas, or spring for box seats and indulge in the Bowl’s culinary program, developed by James Beard Award-winning chefs Suzanne Goin and Caroline Styne. Picnic boxes can be pre-ordered and come customized with essentials like specialty sandwiches, salads, cheese and charcuterie plates, and artisanal baked goods. Skip the line by placing a mobile order at the many “street food” stands scattered throughout the grounds, serving up favorites like banh mi sandwiches, barbecue, all-beef hot dogs, and individual pizzas. There are also two on-site restaurants available to all ticket types. The Backyard is an al fresco farmer’s market-driven space cooking up meats and vegetables on two large, wood-burning grills. The Wine Bar by A.O.C. pairs an extensive wine list with signature small-plates menu. Advance reservations are recommended for both. 2301 N. Highland Ave., Hollywood Hills.

Located in one of downtown’s revitalized movie palaces, Prufrock Pizzeria is a dependable meal option for any occasion. Over the years, the Regent, which was built in 1914, has hosted some of L.A.’s greatest concerts and dance nights, along with movie screenings and a brunch-time “Rock and Roll Flea Market” on the first Saturday of every month. (Moviegoers may recognize the theater from its recent cameo in the recent remake of A Star is Born.)For its part, Prufrock offers up a star-studded lineup of salads, small bites, and personal pizzas that are cooked in a 900-plus degree wood-fire oven. Two favorites include the Quattro Formaggi a white pie topped with various cheeses and fresh arugula, and the Fiery Hawaiian, with bacon, jalapenos, and a spicy diavolo sauce. For the allergen conscious, pizzas can be modified with gluten-free cauliflower crust and Daiya vegan cheese. 448 S. Main St., downtown.

The younger sibling to the Teragram Ballroom and one of the city’s newest intimate rock clubs, the Moroccan Lounge in the Arts District maintains a packed weekly calendar of local up-and-comers and national touring acts alike. Their dinner menu is only available to ticket-holders during shows, and consists of bar food updated with quality ingredients (much like the Teragram, but with the addition of Moroccan fries). There’s a Beyond Meat burger on the menu for vegans too. 901 E. 1st St., downtown.

You may have noticed the Hi Hat while cruising the bustling nightlife of Highland Park’s York Blvd. Once the neighborhood’s old billiards bar, the rock clubhouse is now home to some of the freshest talent in Los Angeles. Two different pop-up restaurants operate out of its to-go window, depending on the time of day. Every morning besides Tuesday, you can expect to find the much-hyped Belle’s slinging bagels and breakfast sandwiches. They’re open until sell out, which can mean over 1,000 bagels. In the evenings, from 5 to 10 p.m., there’s Hot Gai Chicken, a Thai street-style fried chicken joint from the people behind Sticky Rice. While the bird might be its namesake, additional offerings include fried tofu laab, phanaeng curry fries, and papaya salad. You could do worse than smelling like fried chicken after a night of watching live music. 5043 York Blvd., Highland Park.

The Resident is a fusion of cocktail bar, beer garden, music venue, and pop-up eatery. Inspired by the outdoor beverage scene of East Austin, Texas, the Arts District watering hole is kept nourished by its on-site cookhouse, KTCHN DTLA. Menu items include pulled pork and tomato burrata sandwiches, falafel and tandoori chicken wraps, a habanero egg scramble, and pots of crispy potatoes layered with an array of toppings. Food is available seven days a week, noon to 10 p.m., regardless of whether there’s a gig that night. 428 S. Hewitt St., downtown.

Nestled between residential Los Feliz and Griffith Park’s wilderness, the Greek has a early curfew because of noise, which means shows can start on the earlier side. While the venue setting might be a beautiful locale to spread out the picnic blanket, be advised that security prohibits outside food and beverage. There are, however, pre-assembled picnic boxes that can be reserved ahead of time, along with other dining options. The North and South concession stands offer showtime sustenance—chicken tenders, truffle fries, and their signature Santorini Volcanic Nachos. For a more VIP dining experience, head over to the Mercedes-Benz Star Lounge for Latin-style entrees like a chicken tinga taco salad or a Korean BBQ burrito. 2700 N. Vermont Ave., Griffith Park.

When the “fabulous” Forum reopened in Inglewood in 2014, along with it came a partnership with sports and entertainment food services giant, Levy Restaurants. The $100 million renovation under new ownership by New York’s Madison Square Garden Company revitalized the historic former home of the Los Angeles Lakers and Kings by bringing in new lighting, seating, video systems, and retail. Aimed to showcase some of SoCal’s most iconic dishes, hometown favorites such as Boo’s Philly Cheesesteaks, Carney’s, Coolhaus, Hadley Fruit Orchards, Loteria Grill, Orleans and York Deli, and Pink’s Hot Dogs can all be found among the Forum’s concession stands. Now you don’t need to drive across town or endure long lines to enjoy some of L.A.’s tastiest grub. 3900 W. Manchester Blvd., Inglewood.

RELATED: How Monday Became the Best Night to See Live Music in L.A.