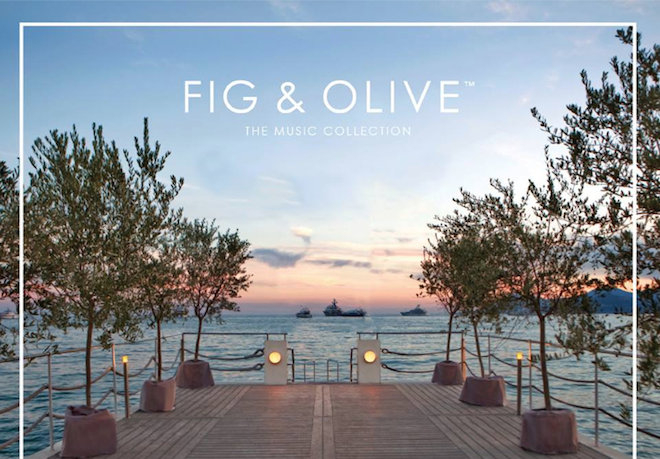 Tomorrow, December 3, Fig & Olive, the restaurant group known for its olive oil-rich Mediterranean fare, will release a compilation album. Fig & Olive isn’t the first company to branch out into music. Starbucks operates a thriving music division, and plenty of so-called lifestyle brands (Pottery Barn, Martha Stewart) regularly release albums that attempt to express their ethos through sound. Entitled Fig & Olive – The Music Collection, the restaurant’s 16-track CD is meant to capture “the elegant lifestyle of St. Tropez and Cannes,” per a release.

So, I had a quick listen. Would the collection project the salty breezes and sunny beaches of fashion-forward destinations into my humble Los Angeles-based living room? Or, might I be inspired to indulge in a plate of buttery branzino or coiled vegetable pasta after hearing the beats?

If new music discovery is high on your priority list, this album isn’t going to cut it. Filled mostly with tracks that were released within the past three years, it suffers from a sound that feels both dated and hyper-fashionable. There’s a tinge of Euro-pop (Nouvelle Vague) and some samba rhythms (Don Gordo Project, Dedicado), but otherwise, it’s straight mood music. A meal at Fig & Olive has always grasped at sophistication, but this album is more sass than class. Kris Menace (Ft. Dominique Keegan From The Glass, Meant For You) might get your head bopping, but Satin Jackets’ You Make me Feel Good and Roosevelt’s Soleil are a boring step backward. Is this supposed to be sexy? I’d rather be sipping on a glass of Sancerre. Parra’s Swept Away achieves a sad sort of romance at the end of the album, but it’s not even close to appetizing. Tres chic sounds too slick on Fig & Olive. Let’s hope they stick to olive oil gift sets from here on out.