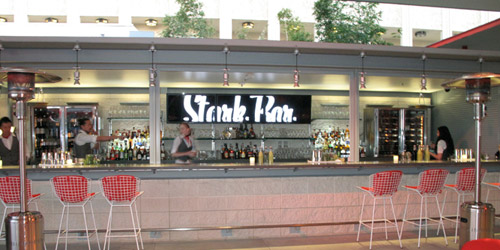 Stark Bar, situated behind LACMA’s Urban Lights (and across the street from the mag), held a media preview of the mod space and grub earlier in the week. I walked into the kitchen nursing a raspberry/cucumber cocktail (a Lost in Yonkers – one of producer Ray Stark’s pictures – the late producer is the restaurant/bar’s namesake) and found Exec Chef Kris Morningstar tending to stuffed mushrooms. He gamely took time out to smile, chat, and shake hands. Later, he had his own little nip, “Just enough to take the edge off.” It was also nice to sit in the Renzo Piano-designed space and chat with the LACMA and Patina Group folks about the project. They haven’t quite finished the garden planned in a green patch out back, but when they do, their farm-to-table concept will be complete. Not that I don’t appreciate the old standby salad-by-weight café next to the screening room on the other side of LACMA, but the small plates coming out from Morningstar’s kitchen (pizzas, pates, fois gras, beef tendon, fried head cheese) were as daring yet familiar as a Jeff Koon’s sculpture. Barsmith Michel Dozois is in charge of the drinks and I had to have a strong coffee (the Ellen Palevsky cups from the decorative arts and design collection will be installed soon) to sober up after the festivities. The bar opens on the 26th, and the restaurant opens for dinner on the 28th. The “official grand opening” will be on March 5th.