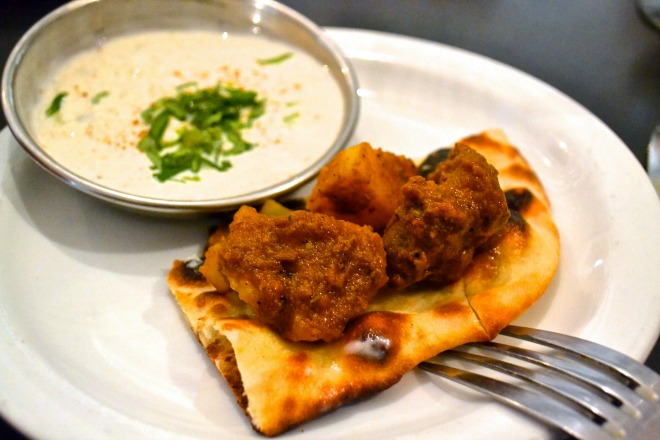 About seven months ago, Badmaash opened its gastropub meets Mumbai street food stall doors. The loft-like, bi-level eatery situated in the historic Higgins Building serves up both traditional and mash-up versions of casual Indian cuisine like saag paneer and chicken tikka poutine, respectively. There’s also a nicely curated beer selection with local breweries like Golden Road and Stone Brewing on the roster as well as at least one Indian beer, Kingfisher Indian Lager.

Badmaash (properly pronounced “budmush”) loosely translates into “bad ass” or “hoodlum.” And one can’t help but wonder, when stepping into the bright, colorful space decorated with campy Bollywood movie posters, irreverent pop art images of Gandhi, four-letter expletives on the menu, and speakers pulsating hip hop from the 1990s (Don’t expect to hear “Jai Ho” from Slumdog Millionaire here), if this rebellious restaurant isn’t the Indian food love child of Starry Kitchen’s Nguyen Tran and chef Roy Choi. It isn’t, of course, but boy it sure could be.

Badmaash is a father and son effort with Nakul Mahendro running the front of the joint while dad, chef Pawan, utilizes his classical French training and 40 years of restaurant experience to plate up remixed renditions of Indian comfort food. (Both very recently relocated from Toronto where the chef also owns Jaipur Grille.)

Chef Pawan is often needled by his forward looking son to rock the boat a bit when it comes to the cooking. When the chef cooperates, dishes like a spiced lamb burger happen, with the burger’s patty concocted mostly from a kebab recipe.

A more familiar lamb vindaloo, seething with bhut jolokia (ghost chili), greets your mouth with over a million Scoville units of heat. Fortunately, a blend of peppers—some sweet, some hot—is used to season the lamb curry so as not to obliterate your taste buds. The lamb is made even more tender thanks to bits of potato that are mixed in. An invigorating cucumber yogurt raita acts as fire extinguisher for your mouth. When everything is bundled into the freshly charred tandoori naan and eaten, you’ll understand why the place gets away with the name Badmaash.