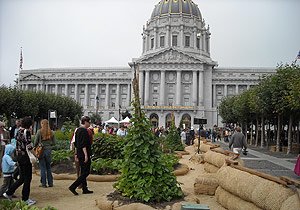 Here, as promised, is the continuation of my report on Slow Food Nation last weekend in San Francisco. The Taste Pavilions might have been hit and miss, but the other half of the event—which took over a big chunk of San Francisco’s Civic Center—felt more on target.

Just across the street from the garden, however, was a series of speaker panels that was anything but public. One woman I spoke to works for a nonprofit organization trying to get more locally grown foods into public schools, and drove up from L.A. for a panel on Slow Food and education. The website had said tickets were still available. They weren’t. I’d love to tell you how amazing it was seeing Alice Waters, Michael Pollan, and Slow Food founder Carlo Petrini in the same room. But I, like most everyone else, couldn’t get in. Instead, the audience was mostly limited to folks already fanatic enough about the cause to snag tickets a month in advance. Eh, c’est la vie.

Besides, who cares about a bunch of babbling farmers, chefs, and hungry hippies when there’s sausage to eat! Right next to the Victory garden was a series of booths selling ethical versions of everything from vegetarian Chaat from Vik’s Chaat Corner in Berkeley to monster pork sausages with peppers and onions. The Let’s Be Frank grass-fed beef hotdog cart—often found shilling gourmet wieners outside the Helms Bakery building in Culver City—was also in attendance.

On the other side of the Victory garden was a farmer’s market, where California farmers were selling all sorts of fresh produce, cheese, fish, honey, drinks, and more. If the Santa Monica Farmer’s Market felt thin last Saturday, maybe that’s because Barbara Windrose from Coleman Farms was there with her apples, Alex Weiser (pictured below) of Weiser farms was on hand with potatoes, and Phil McGrath of McGrath Family Farms came with a selection of late summer beans.

This seemed to be what the event was all about: celebrating local, artisanal foods and the dedicated people who grow or craft them, showing the general public exactly what, say, a broccoli bush even looks like, and inspiring everyone to think a little more about what they eat. All of that, free of charge.

Over the three-day weekend, there were also a number of event related dinners, hikes, workshops, and excursions. Honestly, it was too much for any one person to try and conquer. No word yet on exactly if, when, or where they’ll be holding the event next year, but I think there’s plenty of room to grow. More pictures below.