Home Uncategorized Morning (or 3) After: The James Beard Awards 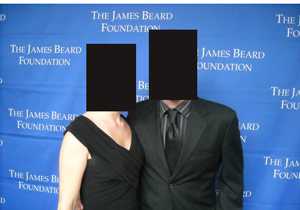 One would think that the record breaking heat plus snorkel-worthy humidity might have spoiled some appetites for the 2008 James Beard Awards in NYC this past weekend. One would think… Instead, on Sunday, June 8, a few hundred of the most important figures in food—and me—scraped and fought our way to the gourmet grub tables after the three hour ceremony hosted by Kim Cattrall and Bobby Flay. Seriously, have these people seen food before? The line for tamales from Maricel Presilla’s Cucharamama in New Jersey was a cool 20 minutes—all night. But I was happy to see the hoards clamoring for Nancy Silverton’s tasty mozzarella creations—braised leeks or artichokes topped with a hunk of creamy cheese. My favorite of the night: mini buttermilk biscuits with some crazy artisanal prosciutto and a berry dipping sauce—oh, and butter—from the Indigo Girls’s own Georgia restaurant, Watershed.

The ceremony itself was long, and the color commentary by hosts Cattrall and Flay was about as smooth as a mouth full of vinegar. (How many times can you make innuendos about sushi in one hour? Answer: three.) But still, there’s just something warm and fuzzy about watching chefs, cookbook authors, food photographers, and mom and pop bakers get all dressed up and win an award for what has long been a pretty thankless profession. The theme this year was “Artisanal America” with a heavy emphasis on local and sustainable, which gave the glitzy event some honest-to-goodness heart. We got choked up more than once during this thing—not counting the blowout tear-fest when Alinea chef Grant Achatz won “Outstanding Chef of the Year.” (If you don’t know the story, read.)

Speaking of tears, Los Angeles chefs were pretty sadly represented, overall: yes, it’s an honor to be nominated, but a win wouldn’t hurt. Mozza executive chef Matt Molina seemed the biggest oversight—he was nominated for both Best New Restaurant and Rising Star Chef. Other local nominees (aka, losers) included David Myers (Best Chef Pacific), Suzanne Goin (Outstanding Chef), and Campanile (Outstanding Restaurant). I talked to Mozza GM David Rosoff for a bit after the event, who seemed equally frustrated at our city’s poor showing—which anyone who has eaten out here recently knows is not for lack of talent.

If you ask me, it’s time for the Beard Foundation to open a West Coast house and see that great California food exist south of Napa Valley. Of course, after the weak attendance at the Beard Chefs and Champagne event in May, I’m not sure that’s going to happen any time soon.

Still, overall the event was a legitimate blast—a heartwarming one at that—as was the rest of my NYC visit. Expect some posts re: greenmarkets, pastrami, and chopped liver in the near future.