Home Dining Chefs and Restaurateurs One of L.A.’s Most Skilled Sushi Chefs Returns to the Scene at... 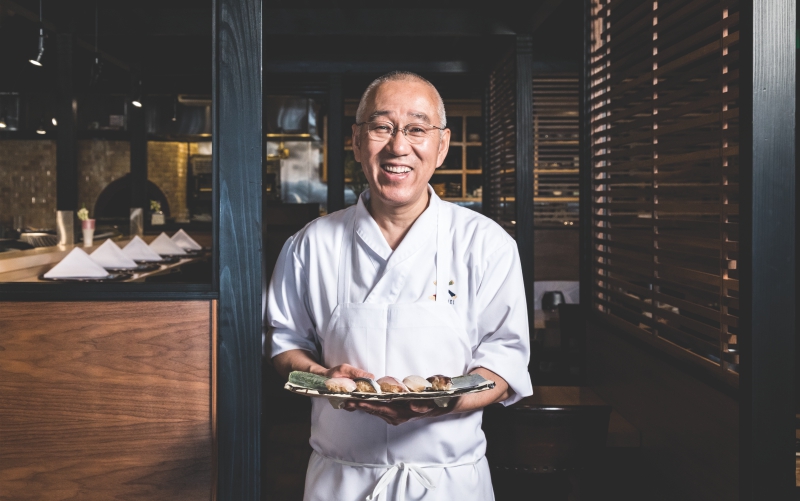 When Mori Onodera opened his restaurant in a squat corner unit along Pico 18 years ago, it was a big moment for the city’s sushi scene. With artwork from recognizable names on the white walls, the minimalist space felt as much like a gallery as it did a sushi counter. The fish was, of course, impeccable: Overnighted from Japan daily by downtown’s International Marine, it was hand-selected in the early morning by Onodera, who grew his own short-grain koshihikari rice in Sacramento to ensure the perfect texture. More often than not you were eating off a glazed ceramic dish thrown by the chef himself, a noted pottery enthusiast.

The sushi maker as obsessive perfectionist might seem like a cliché in the post-Jiro Dreams of Sushi era (Onodera trained under Japan’s Jiro Ono early in his career), but at the time the notion of an itamae so laser-focused on the minutiae wasn’t just uncommon—it was groundbreaking. When Onodera quietly slipped into semi-retirement in 2011, selling his sushi shop to a capable apprentice and focusing on pottery making and rice importing, regulars reacted with heartbreak.

So it was big news when, last November, Onodera materialized behind the bar at Shiki, an upscale Beverly Hills restaurant known for showcasing luxury Japanese ingredients. The master had returned. Not that the 54-year-old Fujisawa native, always ready with a quip, would frame it that way. “I feel better than ever,” he says. “There’s less pressure when someone else is the boss.” Onodera was coaxed back by longtime friend Nao Sugiyama, an acclaimed Manhattan kaiseki chef who moved west last year. “He would call me every day and ask me to come work with him,” says Onodera. “Finally I said yes.”

An omakase meal at Shiki’s wood counter might begin with a few of Sugiyama’s seasonal bites—bamboo shoots stewed for three days, a baby kumquat suspended in gelée—before the focus shifts to sushi: a lozenge of kelp-marinated sea bream; mackerel cured briefly in salt; toothsome geoduck clam with a hit of yuzu zest. It can be tough to describe Onodera’s aesthetic, but the word harmonized leaps to mind. He balances his soy sauce with a blend of sake, seaweed, and a pinch of sugar. The rice, seasoned with a blend of aged vinegars, is kept at body temperature. Strong flavors are softened and deepened; simplicity is crucial. There is no chef in Japan or America making nigiri quite like Mori-san. Could he be the Jiro of L.A.? The Sinatra of shari? Give him a few more decades.

“Jiro-san is in his eighties and still working,” he says with a grin. “I think that would be a good goal for me.”

RELATED: How to Eat Like a Local in L.A.’s Best Dining ‘Hoods