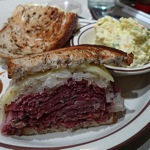 53-year-old Junior’s Deli in Westwood will be shuttering on December 31, due to an alleged rent dispute with their landlords. Junior’s co-owner David Saul tells the LA Times: “It’s catastrophic for me. I’m at a loss. It’s like I’m grieving a death.” While they hope to re-open the Westside eatery in another location, we’re left wondering where to get our marble cake fix in the meantime. [LA Times, via Grub Street LA]

Sierra’s Mexican Restaurant, a Canoga Park institution since the early 1930s, is saying adios at year’s end, along with its next-door sister restaurant, Mission Burrito. The properties were reportedly sold to make way for an unnamed development that’s part of a larger plan expanding out from the Warner Center. [Daily News, via Eater LA]

Fraîche in Santa Monica has already bitten the proverbial dust, locking its doors just months after the closing of the Culver City location, which resident restaurant critic Patric Kuh had named Best New Restaurant back in 2007. From his original review in the September issue of that year:

“There are times as a critic when I think I cannot describe one more beet salad, when another press kit announcing the use of only the finest farm-fresh ingredients can make me want to run. But then a restaurant like Fraîche opens, and my enthusiasm is renewed. With its laid-back elegance and big-flavored cooking, Fraîche defines an ideal. This is true L.A. dining.”

Why Did Santa Monica Police Focus on Protesters Instead of Looters?