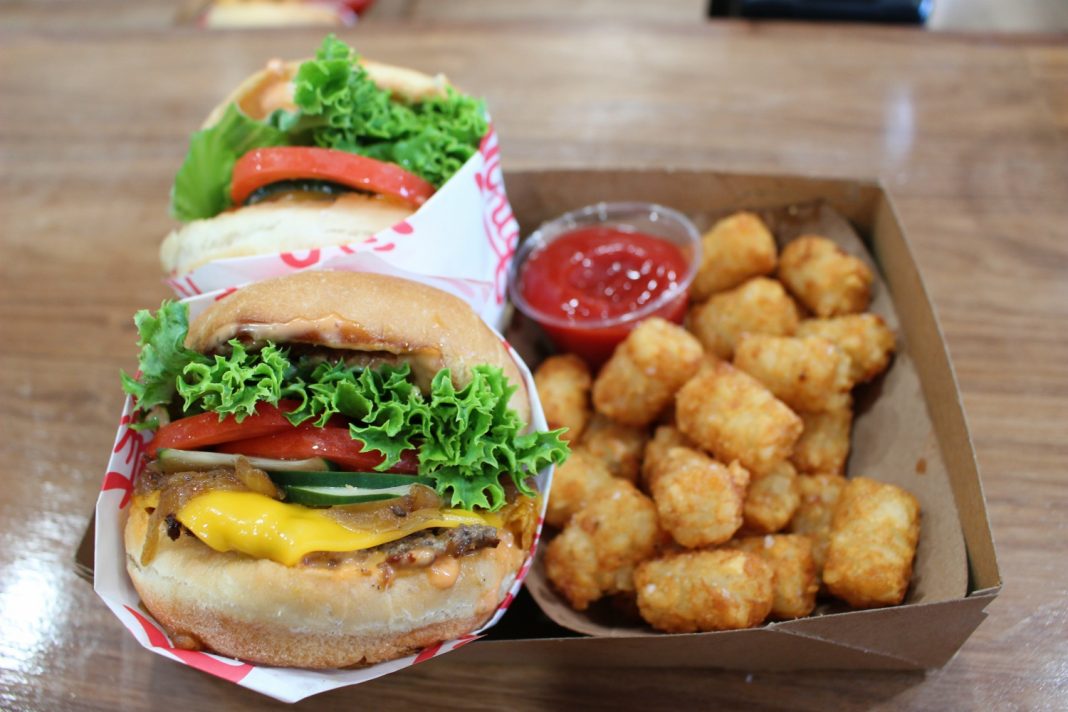 An all-vegan burger with In-N-Out vibes that recently made the rounds during festivals like Coachella and Arroyo Seco Weekend is now available to the masses at a brick-and-mortar in Koreatown.

Monty’s Good Burger soft-opened its first location over the weekend in the Western Avenue space once occupied by Sumo Dog, next door to Frank ‘n Hank’s bar. In the short time since Sumo Dog closed to relocate to Santa Monica, its formerly red facade has been transformed by a coat of cheery sky-blue paint and a sign that says “100% plant-based.” Inside, the blue-and-white gingham walls have been adorned with a logo featuring the restaurant’s mascot, a white Schnoodle (Schanuzer-Poodle mix) named Monty, mowing down on a juicy burger.

Monty is an actual dog that belongs to one of the partners in the business, Coachella director and producer Bill Fold. Fold teamed up with other heavy hitters he’s worked with at music festivals to bring Monty’s Good Burger to fruition. The partners include Nic Adler, Coachella’s culinary director and Eat Drink Vegan festival founder; Dirk and Amy Alton, who own BBC, the food-and-beverage event company that counts Coachella among its clients; and Derric and Erin Swinfard of large-format digital printing company Monster Media, Inc., who also work with Coachella.

Fold says when he dreamt up the idea for a vegan burger joint after being blown away by the realistic meaty taste of an Impossible patty, he set out some goals. “It needs to be very simplistic,” Fold recalls telling his team. “It needs to be fun and have a logo and a brand that says it’s not super serious. And I want it to taste like In-N-Out. I want it to be an alternative for many people who have become vegetarian or vegan, whether it’s been one year [or many years for them].”

Indeed, the menu is a simple one that pares things down to the basics: single and double burgers, fries, tater tots, a kale caesar salad, shakes, and floats. Although Fold originally wanted their burgers to taste like In-N-Out’s, it was important to him that they put their own spin on it.

Chef Brian Fitzgerald, who’s also BBC’s head chef, created a burger for the restaurant using the Impossible patty, which is referred to as “the veggie burger that bleeds” and has been popping up on menus throughout the country. It’s stacked with fresh lettuce and tomatoes, grilled onions, a house spread that’s basically a vegan Thousand Island, and melted Follow Your Heart vegan cheese, and sandwiched between two fluffy Bosch Baking potato buns. One of the departures from In-N-Out is the addition of lightly pickled cucumbers to the burgers.

The result is a vegan burger that actually tastes like its beefy counterpart to the point where Adler says some customers weren’t even able to tell the difference. Adler says that on opening day, a lot of their customers were new patrons who randomly wandered into the restaurant as they were walking down the street. “Halfway through their meal, they’re like, ‘Is this vegetarian or something?’” he says.

The team tries to use locally sourced and organic ingredients as much as they can, and even their vendors, like Follow Your Heart from Canoga Park and Bosch Baking in Thousand Palms, are all from Southern California. Their white-label cookies, however, come from Richard Labbate of Rocco’s Sweet Shoppe out in Gilbert, Arizona. “He’s been an animal-rights vegan for 35 years and is one of the first people who raised that flag [on vegan food],” Fold says. “He’s a great friend of ours. He FedExes out the cookies to us and makes them out of a little commissary, so they’re always super fresh and really good.”

There’s also a social justice and environmentally conscious slant to the business’ ethos. “The ‘Good Burger’ part of it is not just the actual taste of the burger; it’s doing good,” Fold explains.

All the cups, spoons, and paper straws they use are compostable. They pay their employees above minimum wage at $15 per hour. Even the Swinfards’ entire printing operation runs on solar power and uses water-soluble ink. The shop carries Jaden Smith’s eco-friendly bottled JUST Water, which the musician co-founded with his father Will Smith. The younger Smith is also involved with the Monty’s Good Burger’s Koreatown location and has been helping the team promote the restaurant.

Fold says that since the restaurant isn’t any of his or his partners’ day jobs, they’re not living and dying by how many burgers they sell in a given day. With that flexibility, even though some of their practices are more costly, they’d rather make decisions that align with their mission and not cut corners. “This is a business, but this is much bigger than a business for a lot of us,” Adler says. “We feel that there’s a lot of good that we can do.”

Monty’s Good Burger originally grew out of Fold’s plan to open a location at Riverside Food Lab, a food hall with 14 restaurants and bars coming to the Inland Empire. As they’ve been waiting for the space to open, they decided to take their burgers to festivals to test them out, debuting them at Coachella this past April.

Things began falling into place soon after. In early June, they happened to be doing a pop-up at the Beer Belly gastropub, which is just steps away from Monty’s Good Burger’s current Koreatown location. Adler was talking to chef-owner Jeffrey Lunak of Sumo Dog, who told him he was looking for a bigger space out in Santa Monica. That’s when they swooped in to take over his property, and in just a month’s time, they opened the restaurant.

As things are ramping up in Koreatown with a grand opening slated for August 11, Monty’s Good Burger’s Riverside Food Lab stall will open around the same time. For L.A. locals ready to give the vegan burger a taste test, the Koreatown restaurant is already up and running daily, until 11 p.m. on weekdays and 1 a.m. on weekends. And if you want to meet Monty in real life, the celebrated dog will be making a Koreatown appearance for the grand opening.