Home Music Moby Is Curating a Vegan Block Party Festival in DTLA, and It... 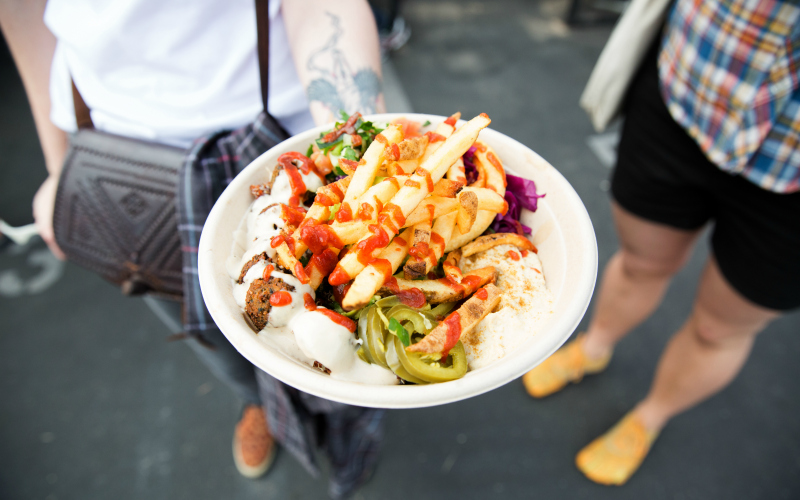 Musician and activist Moby isn’t known for being secretive about his veganism. If you’ve stopped into his all-vegan Silver Lake restaurant, Little Pine, you have likely spotted him puttering around the back in a hoodie emblazoned with “Vegan Straight Edge,” or maybe you’ve heard, like, any of his records, or read his books, or seen his Twitter feed, or… Anyway, he’s really into animals, is the point, and specifically the “not eating them” thing. Now he’s sharing that enthusiasm with fellow Angelenos in the form of a big block party featuring music, presentations, drinks, and lots and lots of vegan food.

Circle V (the V is for vegan, probably?) takes place on Saturday November 18 at The Regent Theater (448 South Main Street, Los Angeles) and along the block outside, which will be shut down for the festival, which runs 2 p.m. to 10 p.m. While the message is distinctly meat-free, the festival wants to be all about inclusiveness, and non-vegans are totally welcome to participate (though it might not be the best place to wear that commemorative T-shirt you picked up at the Bacon Festival, just a thought). Moby wasn’t not going to play some tunes at his own festival, right? Sharing the main music stage with him will be DREAMCAR (bass player Tony Kanal, formerly of No Doubt, is helping curate the fest), rapper Waka Flocka Flame, soul crooner Raury, and comedian/vocalist/James Corden show bandleader Reggie Watts. Over on the speaker’s dais, some 50 different influential vegans from Kat Von D of tattoo, make-up, and reality TV fame, to plant-based food blogger and Instagram superstar Jasmine Briones of Sweet Simple Vegan.

There are five different tiers of tickets available, ranging from $35 to $140. The basic, general admission tickets will get you entry to the music and outdoor vendor village, but you’ll be buying your own food and drinks a la carte and missing out on the speaker program inside The Regent. Upgrades include tickets with speakers ($55), beer garden access ($80), an hour of free food sampling from all vendors ($100), and full VIP status with everything plus an invite to a special after-party ($140).

RELATED: Her Vegan Pastries Are So Good You Will Forget Butter Even Exists