Home Uncategorized Mickey Mouse Gets His Own Starbucks 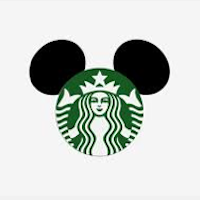 Yesterday, Starbucks opened the first company-operated Starbucks in the U.S. inside Disneyland in Anaheim. The project, years in the making, is the first of five locations to open within Disney’s magical walls this year.

On the outside, it looks like a regular Starbucks. Inside, it feels a lot like a Patagonia store. A whole wall is dedicated to an interactive video installation, much like an enormous iPad, where guests can draw, play games, and take selfies. The idea is to bring out the kid in everyone, a talking point emphasized by brand reps.

Taking a ‘cue from artisanal coffee shops, Starbucks at Disney has a separate section where guests can pick out fair trade and single origin coffees from around the world. Video footage in the space displays moving pictures of where the beans are grown, and by whom. Starbucks calls this area and experience the “bean to cup story.”

The menu is identical to Starbucks’ across the country, though their reserve section allows guests to pick single origin, fair trade beans and have them brewed to order. Butterbeer is not listed among the new shop’s menu items.

Starbucks at Disneyland is now serving and operates during regular park hours.