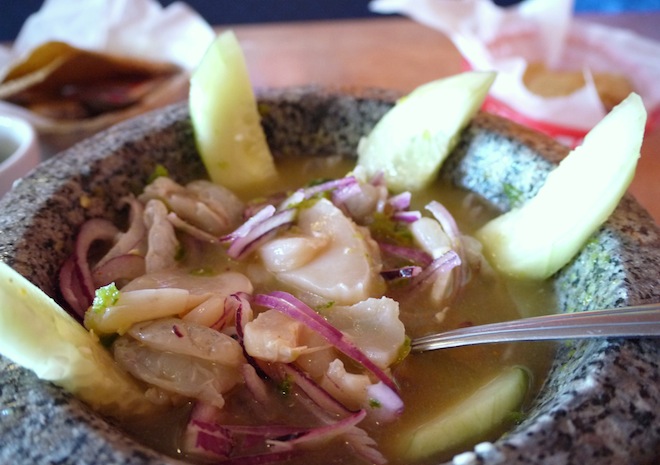 Raw seafood has been consumed in Latin America since pre-Hispanic times. The coastal regions used (and still use) a variety of local acidic fruits to “cure” their fish preceding the arrival of limes brought by Spanish invaders. In Mexico, the most prominent style of raw seafood in modern times comes from the states of Sinaloa, Nayarit, and the contemporary kitchens of Baja, California.

Lucky for us, L.A. is packed to the gills full of Nayaritan and Sinaloan seafood restaurants that serve excellent Mexican-style sashimi in the form of aguachiles (raw seafood in lime and chiles), molcajetes (lava rock mortars filled with raw seafood cooked in lime), and botanas (seafood snacks).

Raw Mexican seafood is closest to Japanese sashimi in the preparation of flat white fish like flounder, sea bream, and halibut. While sushi masters dress these fish with sudachi, a small round green citrus fruit from the Tokushima Prefecture, in Mexican cuisine, it’s the key lime that’s favored by seafood cocktailers.

The Cadillac of Mexican sashimi is the callo de hacha, or pen shell clam from the Sea of Cortez and the Pacific coast. This is really a type of scallop that’s always served raw; moments before serving it’s given a bath of key lime, and spiced with salsa verde, or chiltepin (dried chiles), Sinaloa-style. For a taste of this exquisite product in L.A., head to Mariscos Culiacan in Bell Gardens. Try the pen shell clams in a molcajete with other raw seafood, vegetables, and even soy sauce.

Coniseafood remains the touchstone in Los Angeles for Nayarit style aguachiles–they bring in fresh, large shrimp from Mazatlan and serve them head on in a shallow pool of key lime and pureed jalapenos, garnished by sliced cucumber, red onion and a sprinkle of sea salt.

Mariscos Los Dorados and their sister restaurant, Mariscos El Cachi–both Sinaloan style–are about the only places in town to dive into a plate of callo de lobina, or large mouthed bass, where large, raw chunks of the firm fleshed white fish are once again served in lime and fresh green chiles. The flavor is light and clean with a sumptuous tuna steak-like texture.

The key element to Mexican seafood, just as in Japanese sushi and sashimi, is about the freshness of the fish–just ask  star sushi master Ken Namba of Kiriko, who’s featured in Los Angeles magazine’s May issue. Namba often carries callo de hacha from Baja California, has a Bajapon (Japanese and Baja Californian) menu, and runs down to Baja every chance he can get.

Where to Find L.A.’s Best Mariscos