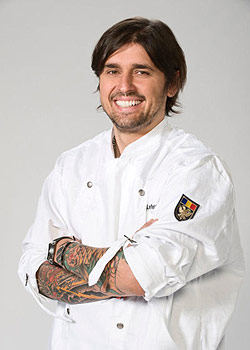 Spoiler alert! If you haven’t yet watched the latest episode of Top Chef Masters—which pit our own Ludovic Lefebvre (of LudoBites) against Chicago’s Rick Bayless, Puerto Rico’s Wilo Benet, and Napa’s Cindy Pawlcyn—look away now! After trying to follow Chef Ludo’s highly publicized tweet-by-tweet of last night’s episode (tweets like “RICK LOVES TONGUE” are hard to follow when he’s watching the episode on his DVR two hours after it aired live) we decided to give him a ring this morning and get his reaction—in way more than 140 characters.

LBS: Ok, so I have to ask, what’s with the beef between you and Rick Bayless? Was that real?

Ludo: I guess it was real—it was not just for the show, but I think they pushed it a little. They shoot us for 20 hours, and they just take what they want. I really respect Rick, and we have fun together, but I really wanted to beat him. We compete for charity, but still, you want to win! I tried his tacos and, well, it’s tacos, you know? It’s guacamole, potato, and tongue.

LBS: You, of course, made the pig’s ear quesadilla.

Ludo: When I got the pig’s ear, I was excited. I’ve cooked a lot of pig’s ear in France. We do a lot of headcheese and we fry the pig ear. But I was thinking that the best way for me to sell pig’s ear was to do something very common for people, like a quesadilla. It’s street food, you know? And it’s a quesadilla! It’s not complicated. You put in the cheese, the pig’s ear, and chop chop! That’s it. Ça vas.

LBS: Do you wish you had made something else?

Ludo: I would have been happier to do a pig’s ear headcheese thing like we do in France, but there was no time for that. I fought with the judge with the glasses, the Saveur editor [James Oseland]. He said, “Why don’t you do head cheese?” I said, “I’m sorry, but you should know, it takes time to do head cheese!” And for a street food challenge, I don’t know if headcheese is very…street food.

LBS: Did it seem like the public liked it?

LBS: You definitely came off as the crazy Frenchman.

Ludo: I know! In the first quick fire, I did the tartare with the red gazpacho with beets and balsamic. The servers came to pick up the dishes and they forgot to put my gazpacho sauce on the plate. So I see the judge start to eat my tartare without the gazpacho and I was freaking out! They don’t show this on TV, but I was screaming at the producer, I was saying, “I’m going to leave the show now if you don’t take my sauce now!” I threatened to walk off the show. “Put my sauce out now, we start again!”

LBS: I recognized that dish by the way. You serve the watermelon with tuna and beets at LudoBites.

Ludo: Ah yes! You noticed. I do like watermelon.

LBS: How was it spending time with the other chefs?

Ludo: It was good for me to speak with Cindy, with Rick, and with Wilo because they have a lot of experience in the restaurant business. I’m still very green, and they’ve all been running restaurants for 20 years. The next time I go to Chicago I am going to see Rick, trust me.

LBS: You can go in and make fun of his quesadilla.

Ludo: Exactly! I cannot wait to go see Rick to teach me how to do a quesadilla. I like when he said, “How does a French guy know how to make a quesadilla?” You know Rick, hello? You’re from Oklahoma! My quesadillas were on the menu at Lavo [in Las Vegas]. I’d sell 100 quesadillas a night, and people loved it. It was the number-one seller!

LBS: Do you cuss that much in your kitchen normally?

LBS: I take it from your tweet “I speak English!!” that you didn’t know you were going to be subtitled.

Ludo: Oh my god, when I saw that, I thought, “Oh great.” I could not believe they put subtitles on me! I know I have a little accent. I’m working on that now because people really like me on TV.

LBS: You do, indeed, make great television. The show had been a bit of a snoozer before this episode.

Ludo: Some people have approached me about another show, so we’ll see. The focus now is to decide what I want to do next. LudoBites is over in August. I’m looking for another location now. But don’t worry, I’ll stay in Los Angeles. I’m very happy in my little bakery.