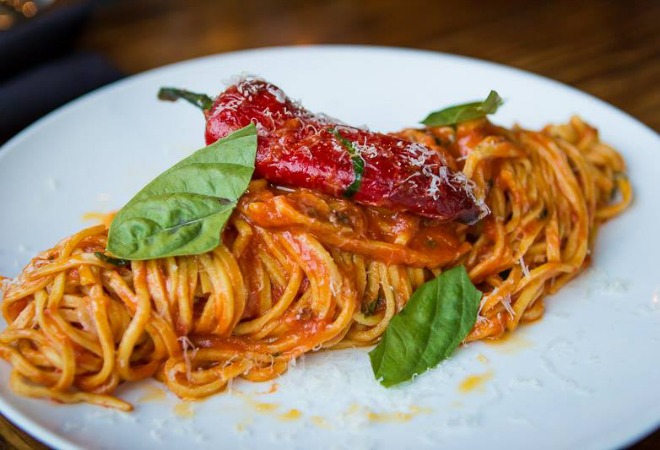 Each Friday, the Digest surveys the burgeoning L.A. restaurant scence and compile this (highly unscientific) list of the most hyped and heralded restaurants in town this instant. Whether old or new, big or small, near or far, these are the restaurants that have people talking. Whatever that means. Anyway, we recommend getting a seat at these places while you still can.

2. Ladies’ Gunboat Society (last week: #1)
The early word on Hart & the Hunter chef Brian Dunsmoor’s new spot on Sawtelle has been very good, as the eager crowds can attest. Dunsmoor and his crew are serving a Southern-infected menu filled with smoked salmon johnny cakes and honey-drizzled chicken-fried rabbit, but since their project is technically a residency, who knows for how long.

4. Union (last week: #2)
Hype for this Northern Italian charmer in Pasadena has been steadily building, with chef Bruce Kalman putting out hearty dishes like roasted porchetta, spot prawns with treviso, and spelt cavatelli. The wine list, which blends local and Italian finds, is worth perusing too.

5. Fifty Seven
Word arrived this week that David Nayfeld’s tenure at Fifty Seven will be shorter than expected. He is menu be served until the end of May, when Famrshop chef Josh Drew will take over on June 5. Better catch Nayfeld while you can!

6. Superba Food & Bread (last week: #3)
Restaurateur Paul Hibler has assembled something of a chef supergroup (Jason Neroni, Jason Travi, Lincoln Carson) at this casual Venice hangout, which serves everything from breakfast to dinner along with fresh-baked breads, pastries and desserts. Check out the rotating nightly suppers.

8.. Zinc Café & Market
This O.C. based outfit opened in the Arts District this week. The massive space will serve coffee and pastries in the morning, along with sandwiches and simple entreés for lunch and dinner. They’ll be wine, beer, and cocktails too.

10. Wood
The dude who famously delivered those pizzas to the Oscars this year is apparently the owner of a new Neopolitian pizza place in Silverlake. The pizzas aren’t too traditional though: try one with lamb and mint, or squash and burrata.