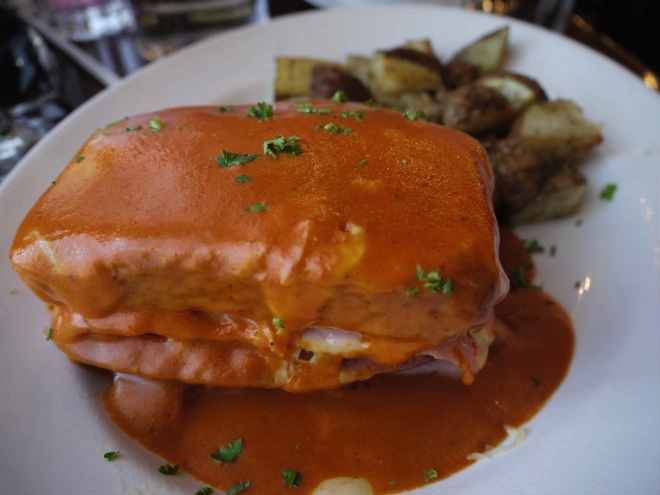 The Francesinha from Nata's Pastries

We are just two days away from National Grilled Cheese Day, at which time our collective arteries will clog like the 405 on a Friday afternoon from the rivers of molten cheese we will inhale. The grilled cheese sandwich is near and dear to our hearts—here in L.A., it is perhaps more patriotic to eat this melted treat on its day of observance than it is to munch a hot dog on the Fourth of July.

If you can’t make it out to any of the grilled cheese events on Saturday, April 12, never fear, because the entire month is devoted to the meal. Yes, April is Grilled Cheese Month, and you might want to explore some of the options that hail from outside the States. Los Angeles has lots of melted cheese dishes from Latin America, the best of which I’ve highlighted here, and I threw in another from Portugal, because it’s just that good.

A simple ham and cheese sandwich melted on a flat-top grill is international, but Brazilians take extra care as this is a regular menu item at all the juice bars, pubs, and lanchonetes throughout the country. Order a misto quente at this Redondo Beach cafe with a Guaraná soda or some juice and you’ll feel like you’re in Copacabana Beach.

At Canoga Park’s own Chilean sandwich shop, you’ll find plenty of grilled cheese options with Muenster (a substitute for Chilean montecoso cheese) on the house pan amasado (kneaded bread buns). Of course, they all come with copious amounts of palta (avocado spread) and mayo. The Barros Luco, named after Chilean president Ramón Barros Luco, consists of a heap of melted cheese and grilled steak on a bun.

The combination of ham and cheese is so irresistible that Mexico felt it was worthy of a flour tortilla that’s been cooked on a comal (flat top) known as a sincronizada. Surprisingly, it’s hard to find a solid version in Los Angeles, but this lonchera on the border of East L.A. and Montebello gets it right.

While this Ventura Boulevard Portuguese bakery is mostly acknowledged for its sweet treats, they’ve had a full menu of Portuguese classics for some time now. The Francesinha is one of the more elaborate melted cheese sandwiches, in which linguiça, ham, and sausage in a small bread loaf are covered in melted cheese and a tomato-beer sauce.