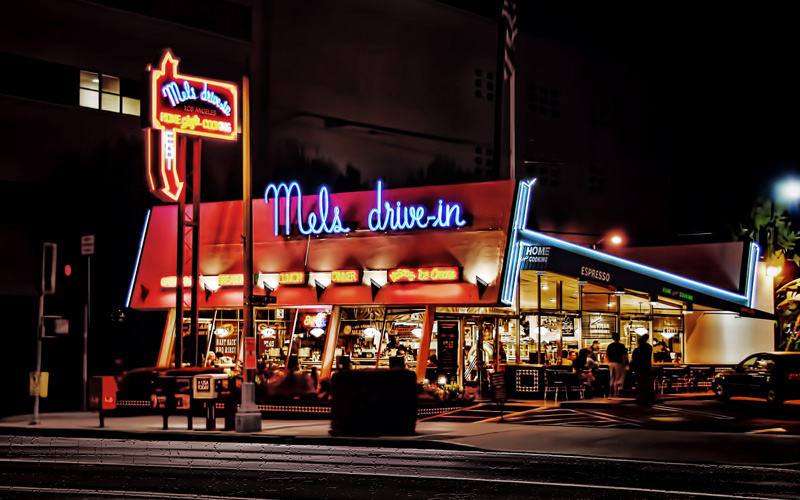 Los Angeles was one of the first cities to embrace the idea of eating inside of your car. Drive-in restaurants thrived here from the 1920s to the 1950s and employed young, uniformed servers to rush food from the kitchen directly to your car window. Restaurateur Mel Weiss was impressed with the busy carhop drive-ins that he saw in Southern California that he introduced the concept to San Francisco in 1947. His stores were icons of car culture, featuring wide overhangs for shade and shelter and miles of neon to entice speeding cars to pull in. Being showcased as the nostalgic centerpiece of George Lucas’s 1972 film American Graffiti cemented its place in pop culture.

There are now seven Mel’s Drive-Ins in Los Angeles and San Francisco, but as of Monday they were all forced to close due to the coronavirus. Mel’s son Steven thinks the answer might be in going back to the restaurants roots. “We don’t have seating inside the restaurants,” Weiss says. “But they didn’t say you can’t have carhop service.”

As of today, Mel’s is bringing back carhops to all of its restaurants. “You drive up, park the car, and instead of using a speaker on a pole like the old days, you just call inside and order whatever you want,” says Weiss. “They can sit in their car and play music, enjoy the neon, and have fun.”

The stores in Hollywood, West Hollywood, Sherman Oaks, and Santa Monica are also open for pickup and app-based delivery, but if you want to make a food run a little more special, Mel’s is trying to help. “People are going to get tired of staying home,” says Colton Weiss, the third generation to run the restaurants. “We’re going to offer that Mel’s experience to them.”

Kids make out especially well in the new service. The Santa Monica location will offer kids meals served in miniature cardboard convertibles, and “Kids eat free,” Colton says. “As long as the schools are closed.” Adults will be offered a half-price milkshake. “We’re making the most of a bad situation,” Colton says. “I think it’s going to be fun for everyone to see how we started. We’re called Mel’s Drive-In for a reason.”

What to Stream This Weekend: ‘In the Heights,’ and More