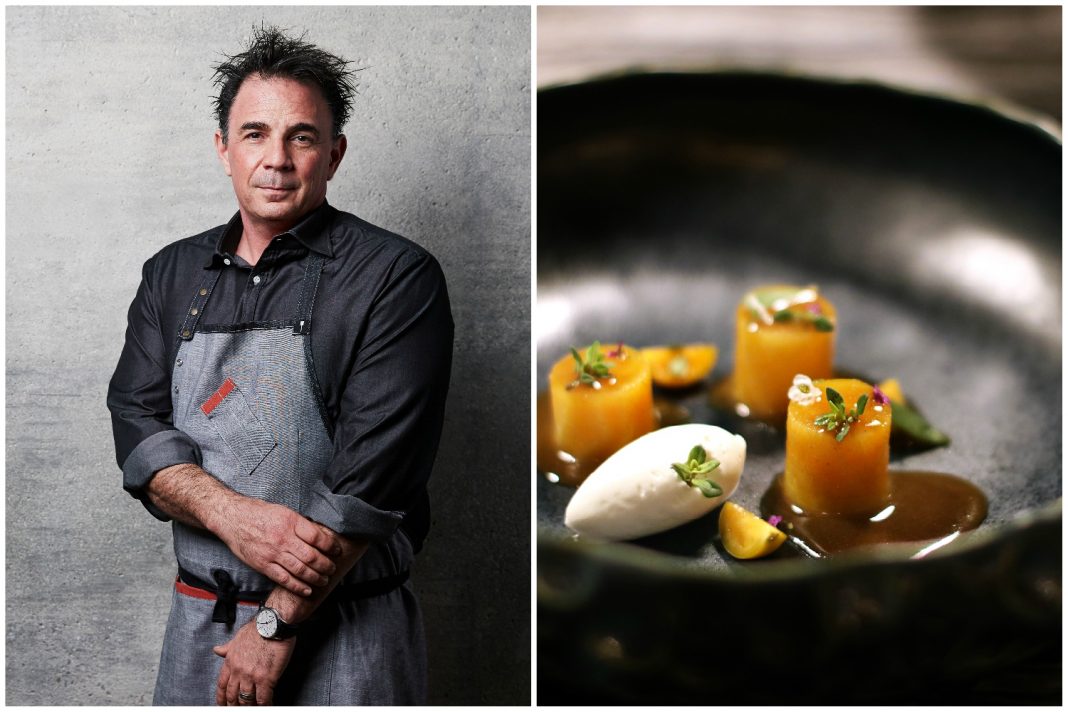 In the middle of 2018, chef Josiah Citrin was at a crossroads. The lease for Melisse, the Santa Monica tasting-menu institution he had operated for nearly two decades, was ending in 2019. He had earned two Michelin stars and ascended to the top of L.A.’s fine-dining world there, but it was time for a change.

“All restaurants have a lifespan,” he says. “I never want to feel that feeling of the restaurant going slower and slower. I wanted to do something different.”

Citrin considered moving to another location, but then he was able to secure a new deal with his landlord.

“When it worked out, I was like, … “‘I’m never going to get anything better in Santa Monica,’” says the L.A.-born Citrin, an avid surfer with artfully disheveled hair.

He closed Melisse for renovations last March. In December, he opened two restaurants in the space.

One is an intimate reimagining of Melisse, a 14-seat, tasting-menu-only room that will serve pressed duck, wild game, and truffle-topped uni puffs. But the headliner is the more casual Citrin, a 90-seat a la carte destination. “It’s a higher-end neighborhood restaurant,” says Citrin, who is gunning for a Michelin star with the place. “But it’s a neighborhood restaurant.”

Starters include oysters that glow and pop with fermented cucumber and trout roe. Instead of the truffle chicken dish he was famous for at the original Melisse, there’s a more rustic but no less flavorful chicken basted with tamari, blended kiwi, miso, and Dijon mustard and crusted with sautéed brioche bread crumbs, garlic, and Meyer lemons. “It’s like at home when you take a chicken out of the marinade, and you don’t brush it off enough,” he enthuses. “You roast it, and you have those little caramelized bits on it.”

There are also much more luxe options, such as an egg caviar dish and a lobster Bolognese that gained acclaim at the original Melisse.

The new restaurants follow a string of recent hits for the 51-year-old Citrin, who has rather quietly become one of the city’s most dominant chefs. Dear John’s, the retro steakhouse he opened in Culver City with Hans and Patti Rockenwagner last year, is an old-school blockbuster. Openaire, which hit in late 2018 in Koreatown’s Line Hotel, is a brunch hot spot. Charcoal, a Venice boîte going into its fifth year, is a consistent crowd-pleaser. He’s got a hotdog place—Dave’s Doghouse—at the Staples Center. And he recently debuted Costa Manhattan Beach, a neighborhood joint near the Strand.

Even with all the expansions, he’s still excited to get back to the formal tasting-menu concept at Melisse and showcase his most elaborate and precise cooking.

“There’s something about getting the food to the table at the right time,” Citrin says. “That’s why it’s 14 people. If you have the timing right, you’re in control. It’s about serving perfect food at the perfect moment.”

7 Food Events Not to Miss in March