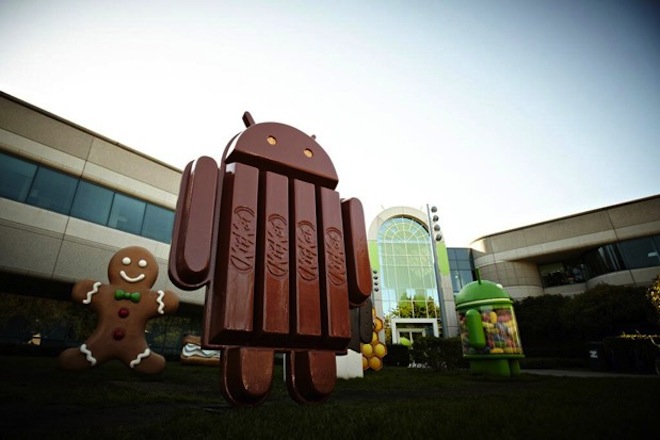 This morning on Google+, Google SVP Sundar Pichai announced the name of the newest Android operating system: Kit Kat. While previous Droid operating systems have been named after sweet treats (Cupcake, Donut, Ice Cream Sandwich), this is the first time Google has named anything after another branded product. The classic candy, produced by Hershey’s in the U.S. (and internationally distributed by Nestle), is apparently a favorite among the tech geeks that roam Google’s famous campus.

Pichai wrote in his G+ post, referencing the above image:

“…love the new #AndroidKitKat statue and can’t wait to release the next version of the platform that is as sweet as the candy bar that’s one of our team’s favorites:)”

Though the operating system has not yet been released, the best part of this news is that Droided Kit Kats will be distributed to 7-11s, grocery stores, and candy aisles later this year. Candy lovers might just find a voucher for a free phone inside their crispy, crunchy milk-chocolate enrobed candy bar. Break me off a piece of that!

It’s… the future of confectionery…