Home Uncategorized Meet The Wallace, A New Den for Dining and Drinking in Culver... 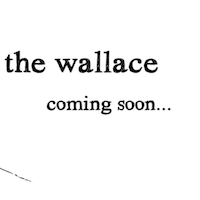 In place of a by-the-pound Brazilian churrascaria on Main Street in downtown Culver City comes a promising new restaurant from former SBE chef Michael Teich. Is there another way to say ‘farm-to-table’ or ‘small plates’? We all know the drill: Teich will source ingredients from Culver City’s farmers’ market (which, conveniently, sets up just outside the restaurant every Tuesday afternoon along Main St.) each week. What sets his menu apart are dishes influenced by both Southern Italy and the American heartland.

A starter of caramelized onion and blue cheese dip is served with house-made Kennenbec potato chips. Eggplant caponata comes with house-made ricotta, and a crudo of Lemonfish gets a spicy garnish of fennel, radish, and Serrano. Braised Duroc pork cheeks, served with mustard greens, lentils, and red onion agrodolce give the menu some heft.

The cocktail list, crafted by bartender Holly Zack (SBE), makes use of ingredients more commonly found at breakfast—namely, coffee and tea. A coffee-infused scotch gets blended with cognac and chocolate-chili bitters in one concoction. In another, Earl Grey tea makes a cameo with pistachio syrup, gin, and grapefruit foam.

The Wallace opens its doors to the public next Saturday, November 30, for dinner. Eventually, the restaurant will open for lunch and brunch as well.

3 New and Notable L.A. Restaurants to Try in June

3 New L.A. Restaurants to Try in May