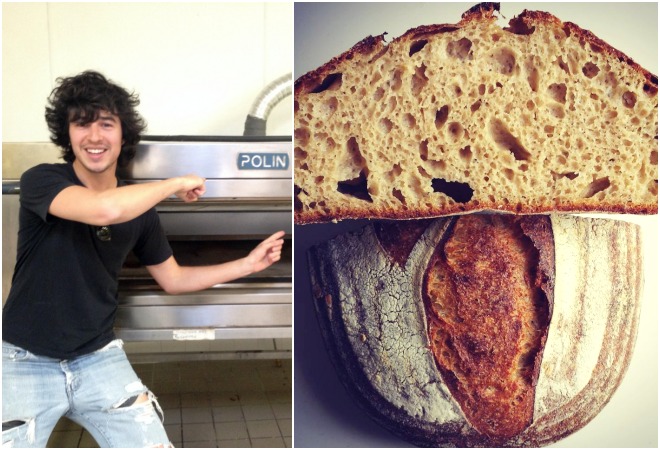 Zach Hall is standing in a back room of a rather inconspicuous-looking commisary kitchen in North Hollywood, best known for producing desserts like red velvet cakewiches and butterscotch pudding pie. But Hall isn’t there for sweets. He’s admiring the massive deck oven he just had imported from Italy, which will be the centerpiece for the coming expansion of his artisanal baking operation, Clark Street Bread.

“There are two types of ovens that produce really good bread,” he explains, gesturing to his new equipment. “This kind, and a wood-fired brick oven. People think the wood-fire ovens are better somehow, but that’s just nostalgia. You can make amazing bread in the right deck oven.”

Dressed in cut-off jeans and a dark t-shirt, the 29 year-old former musician and West Hollywood native doesn’t quite look the part for someone totally obsessed with things like sourdough fermentation rates, hydration levels, and whole grains ratios. Although you probably haven’t heard of Hall or his company yet, there is a chance you have already sampled his bread. In the nine months since he has been in business, Clark Street Bread has garnered clients like Trois Mec, Farmshop and Lindy & Grundy, who serve or sell his bread as often as they can attain it. Jon Shook of Animal is apparently known to request his bread for catering gigs.

Once you meet the fast-talking and energetic Hall, his rapid rise to prominence begins to make sense. After deciding to swap musical ambitions for culinary ones, Hall served as a pastry chef at Proof Bakery, followed by a bread rumspringa of sorts which entailed putting in time at Portland-based bakeries such as Little T and Roman Candle. He traveled to Sweden to train at a traditional stone-ground bread bakery. Then, after working as the assistant baker for Kenter Canyon Farms, a popular wheat farm and bread vendor located in the Santa Monica Farmer’s Market, he decided to launch his own company specializing in Old World, traditional-style, hearth-baked breads.

These days, inspiration no longer comes from guys like Jerry Garcia and Jimmy Page, but from bakers reviving centuries-old techniques, like Chad Robertson of Tartine Bakery in S.F. “I used to want to be the best guitarist in the world,” admits Hall. “Now I want to become the best bread baker.”

After sampling a few loaves, we’d say he is on the right path. His rustic breads are moist yet airy, with a hearty crust that provides the ideal balance of chew and crunch. The taste is wonderfully tangy but intensely earthy. Hall’s traditional Danish rye, fortified with flax and sunflower seeds, is a stark departure from those dense Scandinavian breads that often resemble drink coasters. His other breads are made using only flour, water, salt and yeast. “The real flavor has to come from the yeast, just like with wine or cheese,” he insists.

Despite the fact that his home kitchen can produce only 25 loaves per day (he and his wife live on Clark Street, which is where the company’s name derives), Hall is producing bread that ranks among the best in the city. His only promotional tool? Instagram. The account for @clarkstreetbread is perpetually stocked with pictures of gorgeous loaves, each decorated as intricately as Anasazi pottery. As you’d imagine, it didn’t take long before the emails began to pour in. “If you work hard on producing a great product, people will notice,” he explains. “They’ll come find you.”

Hall hopes to set up his new operation in North Hollywood by the end of next month, barring further permitting setbacks by the city. With his new deck oven, he’ll be able to quintuple his production (at least) and meet the growing demand of shops (and customers) requesting his bread. “Right now, I’m baking just to keep up with demand,” he admits.

The next step, hopefully, is a full-fledged bakery of his own, where he can expand beyond the four varities currently offered. “There are things that are very important to all Jews, and one of them is working for yourself,” jokes Hall.

For now, you can find Clark Street Bread available for delivery at goodeggs.com or on the menu at Lindy + Grundy, Trois Mec, and Farmshop.

Correction: In a previous verision of this post, Zach Hall was incorrectly described as a former head baker for Kenter Canyon Farms. In actuality, he served as an assistant baker under Kenter Canyon Farms baker Kenny Curran. We apologize for the error.