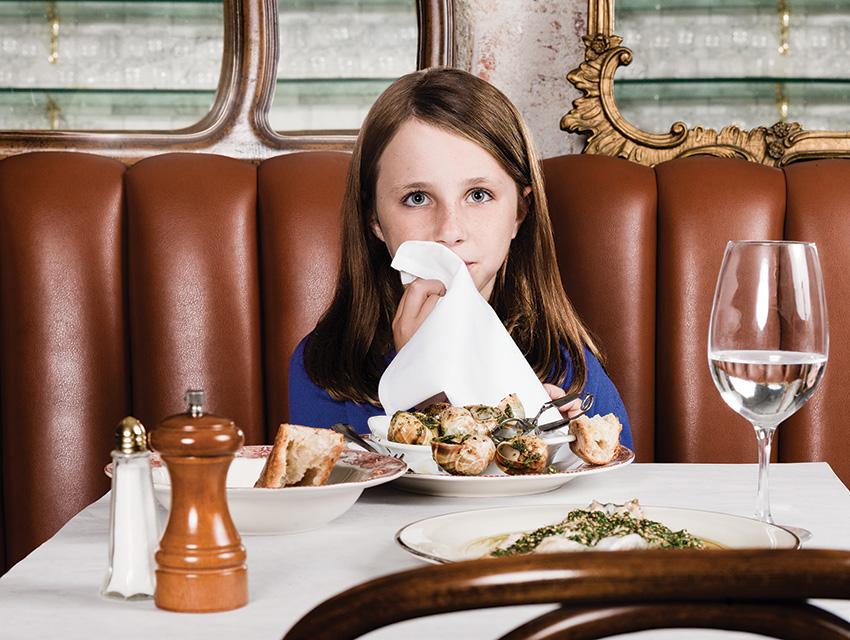 It’s the stuff of nature-versus-nurture debates, but Paulina DePaulo’s parents think they had a hand in their daughter’s well-honed palate. The freckled fifth grader celebrated her tenth birthday with a cooking class at the Hotel Bel-Air. Like a lot of kids these days, Paulina watches more Food Network than Nickelodeon and gets almost as excited about a night at Bestia as a day at Disneyland. She asserts that Ludo Lefebvre’s Trois Mec is a “close second” to Curtis Stone’s Maude and takes pride in the under-the-radar status of her regular Beverly Boulevard sushi joint.

Beverly is also home to her favorite plate of mussels, the ones served at Kris Morningstar’s Terrine. A booth at the ambitious bistro was the setting for a recent tête-à-tête between Paulina and the acclaimed chef.

Paulina has wide eyes and a soft voice that belie her precociousness about food. On her lap rests the pink-and-gold notebook in which she scrawls notes during particularly good meals. Today it holds questions for Morningstar, whose burly frame dwarfs Paulina as he squeezes into a chair across from her.

“What’s your favorite food to eat?” she asks. “Mexican,” the chef answers, adjusting his ginger-colored ponytail. (Hers is sushi.) “What do you like to cook at home?”

“Something simple,” Morningstar says. “Steak and a salad, pasta, or if it’s late, a quesadilla.”

While Paulina sits with the chef, her seven-year-old brother, Sebastian, twirls on a stool at the marble bar, waiting for his french fries. Beside him are his mom and dad, an attorney-slash-chocolatier and a financial adviser, respectively. The couple started taking their kids to restaurants early in the hope that parenthood wouldn’t mean giving up their favorite activity: dining.

First to arrive at Paulina’s table is the octopus—a tendril the same violet color as the girl’s cardigan—atop baby broccoli. Paulina dives in. “How’d we do?” Morningstar asks. “Goooood,” she remarks, her mouth full of cephalopod.

“Do you cook?” asks Morningstar. “One time I cooked a peach clafouti,” she answers. “Do you know what that is?” (He does.) “The recipe was from Julia Child. For a biography in our fourth-grade class, I did her. You had to memorize a speech and dress up like them and everything.”

“My Julia Child was probably Bobby Flay,” says Morningstar. “I got interested in food at the dawn of the Food Network.”

“Oh, I watched him once on a cooking show with Curtis Stone,” says Paulina, “and I like Chopped a lot.”

A cook interrupts with a dish of escargots, their shells flecked with parsley. “Have you had escargots before?” Morningstar had asked when Paulina ordered them earlier. She hadn’t. “It freaks me out a little,” she said, “but usually everything I think is going to be disgusting turns out really good.” Seeing them now, Paulina lifts a garlicky morsel with a tiny fork and pops it into her mouth. “Mmmmm,” she says.

“The first time I had escargots was when I was five,” Morningstar tells her. “I had them in Paris, and I remember they served them with mayonnaise.”

“Weird,” Paulina says, and she goes in for another bite.