Home Uncategorized Meatless Monday: Not All Shark Fin Has Been Banned 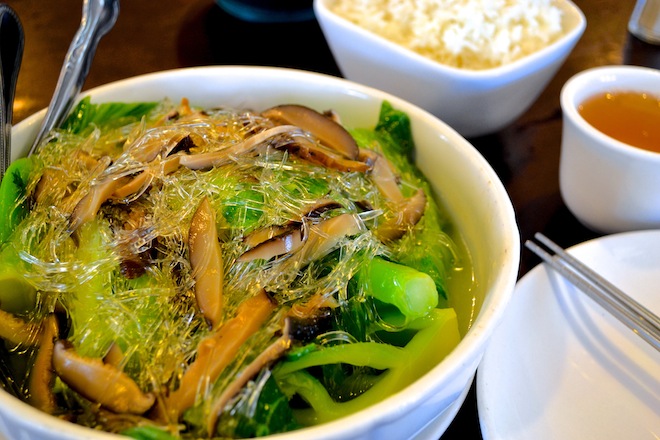 No matter how you slice it, shark fin is an incendiary subject in the food world (though now slightly less so since the ban on shark fin is in place in California). Which is why I had to tell you about the shark fin stew at Vege Paradise in San Gabriel.

Traditionally, real shark fin is considered a luxury food in Chinese cuisine that is offered to guests of honor. Although there is virtually no flavor to the fins, the slippery and crunchy textures are singular. Only mung bean noodle comes close in mouthfeel.

Vege Paradise is located on the second level of the Great Mall of China on Valley Boulevard. There, chefs prepare a simple mock shark fin dish called “Vege Shark Fin with Mustard Greens.” Wading around in a thick vegetable broth, strands of clear vegetarian shark fin made up of high-fiber vegetable collagen are strewn across bulky bundles of bitter mustard greens and slices of reconstituted shiitake mushroom.

The flavors are clear, though the acrid and spicy mustard greens dominate, while the shiitakes contribute an earthy sweetness. Somewhat plain in flavor, this version reinforces the notion that this dish is all about texture.

The crystalline fibers of veggie shark fin retain their bite throughout the meal and never get mushy—just like the real deal, but without the controversy.