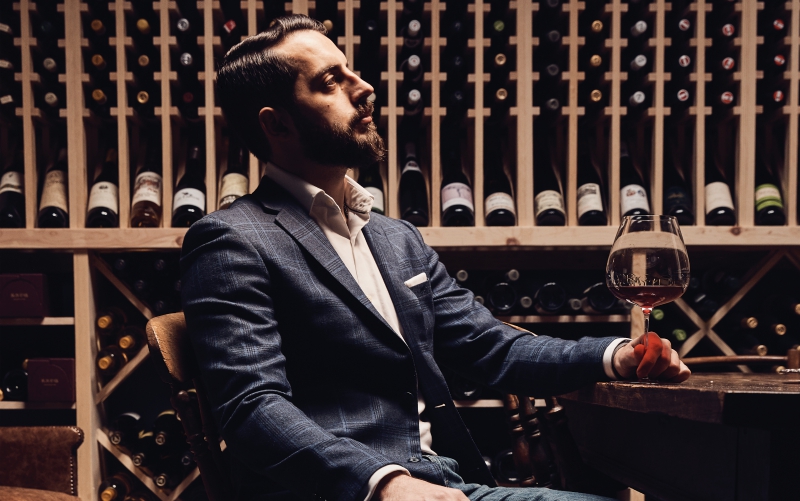 Daylight pours through the skylight of Maude’s private wine loft, softly illuminating a wall of bottles lining the perimeter of this second-story hideaway. Tonight, after a dozen courses, diners who’ve plunked down $500 for the highest-tier pairing at Curtis Stone’s Beverly Hills restaurant will end their meal here, sipping grand cru wines while wrapped in cashmere blankets to ward of the room’s 60-degree chill.

A few hours before service, sommelier Andrey Tolmachyov gives me a tour of the racks, from the whites of Italy and Austria, past rosé and orange until he stops at the reds. “This is where the unicorns are,” he says, gazing up at a row of Burgundy’s finest in which just one bottle of Armand Rousseau or Domaine Dujac might cost more than a plane ticket to where it was made.

Tolmachyov is 26 and, in the parlance of Instagram, living his best life. When Stone decided to pivot from spinning his monthly tasting menus around a particular ingredient to creating quarterly menus inspired by wine regions around the world, he hired Tolmachyov away from Osteria Mozza. As the team was getting January’s inaugural Rioja-themed menu of the ground, Tolmachyov traveled with Stone and a few colleagues to Burgundy—specifically the town of Beaune in the Côte d’Or—where they spent their days traversing the storied terrain of Chablis, Puligny-Montrachet, and Meursault, selecting the wines he’s now pouring alongside chef Justin Hilbert’s escargot and oeufs en meurette.

That arrangement, where wine dictates the menu as opposed to the other way around, is about as common as letting backup singers perform a solo. The uniqueness of the opportunity isn’t lost on Tolmachyov. “The whole concept was a dream,” he says. “Going to Burgundy, seeing the landscapes, the soil, the history, the culture, and the cuisine—people work in this industry for years before they get to experience that.”

A decade ago, Tolmachyov was living in Almaty, the largest city in Kazakhstan. His father made wine, not from grapes, but with leftover cherries grown in his grandmother’s orchard. When his family immigrated to Brooklyn just before his 16th birthday, his English vocabulary consisted of words he gleaned from video games: start, reset, options.

After high school Tolmachyov enrolled in the Culinary Institute of America, and, as fortune would have it, scored a postgrad job as a kitchen server at New York’s acclaimed Eleven Madison Park. In two and a half years, buoyed by his own relentless enthusiasm, he went from being too young to drink to passing his Level 2 Certified Sommelier exam. “Sometimes when I talk about wine I sound really, really snobby,” he says with an embarrassed smile, “but my wine palate was shaped at EMP, and you get spoiled fast.”

Until Maude’s burgundy menu wraps up at the end of June, Tolmachyov will uncork at least eight bottles of grand cru burgundy each evening during service, bottles that you’d rarely find on the shelf at Total Wine, ones that are coveted by collectors across the world. For now he’s savoring the moment.

“If you work elsewhere you read about these wines in books and watch people post about them online,” he says, still in disbelief, “but at this level you get to pour them every night.

RELATED: An Inside Look at the Trip to France That Inspired Maude’s Newest Menu