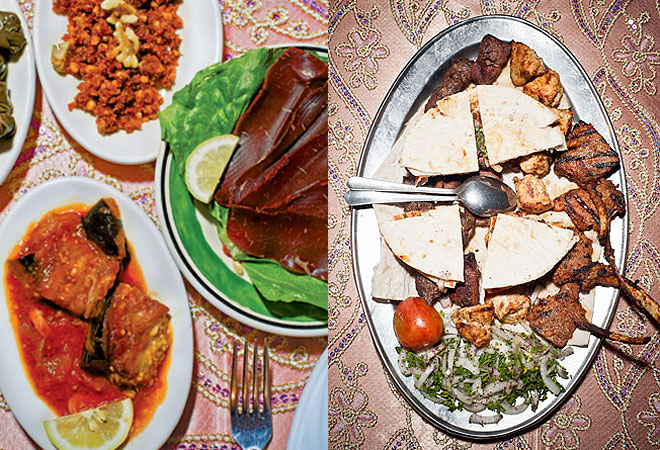 In this Sunday’s New York Times Magazine, food columnist Mark Bittman visited our neck of the woods for his piece “This Armenian Life,” to dine on what he considers some of the best Armenian grub in the country.

The How To Cook Everything author is in the Baskin Robbins birthplace for Adana, an understated (by Armenian dining standards) Armenian-Russian-Persian spot just on the border of Burbank where chef-owner Edward Khechemyan prepares an assortment of of kebabs, salads, and a few Russian standards.

“The menu is a hodgepodge in the best sense of the word,” writes Bittman, “boasting of innumerable kebabs and more than a few intriguing salads and dishes of beans, and of rice and other grains.”

Apparently Bittman has been popping by this joint for years, so it’s only slightly awkward when the How To Cook Everything author joins Khechemyan in the kitchen and discovers he’s dousing the lima bean and rice dish, baghali polo, with jarred garlic powder: “an ingredient I haven’t used in 20 years or so, but hey…”

The article also includes recipes for Adama’s baghali polo, baby-back-rib kebabs, chicken-thigh kebabs, and a classic Persian salad, “something I’ve been making all summer,” he writes. “If I were you, I’d just start chopping.”

Anything you say, Bittman!

Our own Patric Kuh weighed in on his Armenian favorites in his 2011 piece, Armenian Rhapsody. Here remain his top 10.