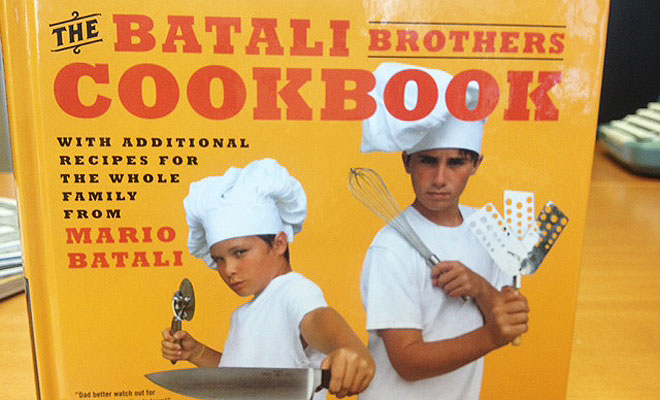 Next up from the Batali group? Not another restaurant, nor some European jaunt with Gwynnie. It’s a cookbook—penned by none other than Benno and Leo Batali, Mario’s 14- and 16-year-old sons. Launched as an e-book over the holidays and finally in hard-back next week, The Batali Brothers Cookbook features the rosy-cheeked, knife-wielding teens and their recipes for dishes they like to make with Pops, such as cinnamon swirl French toast, blue cheese pocket burgers, and of course, spaghetti and meatballs. There are also recipes from the Great Orange-Crocked One himself, based around staples he cooks for his kids including spring onion fritelle, baked ziti, and lemon sponge cake with pear marmalade.

The idea came about after the boys made a cookbook as a present for their dad on his 50th birthday, and the whole thing is rather darling, really. The preface by Benno and Leo features such tear-jerkers as, “Our dad is really special to us,” and, “He is our role model and we always look up to him.” Well shoot, that’s just sweet. We smell a hot Father’s Day gift—and some pretty good pizza—in the near future.

Nancy Silverton Is Eyeing Some Major Moves and Expansions