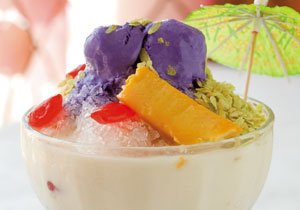 Banana ketchup, purple taro ice cream shakes, and Spam pizza—Filipino food can be a cross-cultural adventure, the dishes a hodgepodge of comfort cuisines. The national specialty, adobo—slow-cooked pork marinated with bay leaves, vinegar, and soy sauce—is partly a product of more than 300 years of Spanish rule. The soy sauce came with Chinese immigrants, and the local palm vinegar gives the dish its characteristic tang. L.A.’s Filipino community is spread across the county, but the Eagle Rock-Glendale area is flush with restaurants specializing in its favorite dishes.

Barrio Fiesta  | Eagle Rock
Local Filipinos were thrilled to see the return of this famous Manila-based chain, outposts of which have come and gone over the years. The classics are top-notch. On Sundays the place is mobbed with families coming in for their fix of kare-kare (oxtail and tripe in peanut gravy), crispy pata (deep-fried pig knuckles), and halayang ube (creamy violet-colored pudding). » 4420 Eagle Rock Blvd., Eagle Rock, 323-259-5826.

Fiesta Sa Barrio  | Eagle Rock
Not to be confused with Barrio Fiesta across the street, this spunky cloth-napkin spot offers the most complete menu of traditional dishes we’ve seen. An order of inihaw na baboy—sweet-salty broiled pork—graces almost every table. Tangy chicken adobo and the Bicol Express—a mix of seafoods in a creamy coconut milk sauce—are also crowd pleasers. Newbies to Filipino cuisine might be wary of dinuguan, a stew thickened with pig’s blood. But if you’re feeling adventurous, it’s worth trying. Halo-halo, the Filipino answer to a sundae, features crushed ice topped with taro ice cream, sweet beans, coconut, and a tiny umbrella. » 4411 Eagle Rock Blvd., Eagle Rock, 323-256-4380.

Davao Tuna Grill  | Glendale
Inspired by the tuna grill restaurants that have reached fad status in the Philippines, Dexter de Vera and Henry Young opened a fast-food replica in Glendale. High-quality tuna is the main ingredient in a slew of dishes: There’s a tart tamarind-based sinigang soup loaded with tuna chunks, a tuna lettuce wrap appetizer, and sisig, diced tuna on a sizzling platter. Purists should try the half- or whole-pound grilled tuna entrées or the tuna collar. » 730 S. Central Ave., Ste. 101, Glendale, 818-662-0990.