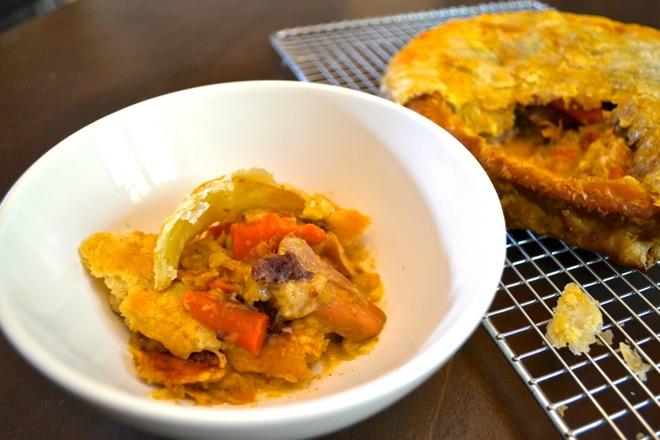 If it were up to Nguyen Tran, the Asian provocateur half of the Starry Kitchen restaurant duo, he would spin an elaborate yarn about the storied origins of their latest creation: Malaysian chicken curry potpie. His “foodlore” would involve a great grandmother back in Vietnam, a secret unwritten recipe, and a well-worn, well-seasoned cast iron pan. After all, Nguyen is the carnival barker who would say—or wear—just about anything to get butts in his restaurant’s seats. (Thi Tran, Nguyen’s wife and Starry Kitchen’s executive chef, is the quiet one who prefers to let her food do the talking.) But when the real story eventually is revealed, you learn that there is no foodlore this time; it was simply inspired by something the Trans ate and enjoyed: Good Girl Dinette’s Vietnamese chicken curry potpie.

However, like any competitive restaurateurs, they believed they could take it a step further. Whereas Good Girl Dinette’s potpie is an individual portion with a top crust made from a buttermilk biscuit dough, Starry Kitchen’s Malaysian chicken curry potpie is designed to feed between 4 to 6 people, and it’s completely enveloped by a top and bottom crust that’s so buttery (using about one quarter-pound stick per pie), it would undoubtedly make even Paula Deen proud.

The craggy and somewhat lopsided crust, created by Starry Kitchen sous chef Leigh Ann Stewart, might not ever win for being the prettiest at the pie contest, but for taste and texture, it’s gorgeous—rich, flaky, and thick enough to hold its own against the heavy filling.

Many diners’ biggest beef with chicken potpie is that there’s not enough chicken, and the Trans felt the same way, which is why the odds of your fork lancing a chunk of meat are very good when it dives beneath Starry Kitchen’s crust. The chicken—all dark meat and lots of it—is marinated overnight in a pungent and spicy Malaysian curry full of coriander, chile, fennel, cumin, turmeric, white pepper, anise, cinnamon, and clove. Then, it’s combined with baby carrots and purple Okinawa sweet potatoes and bolstered with Indonesian sambal badjak chile sauce, easily making this potpie the most spirited and sweat inducing one you’ll ever have. Word of warning though: it’s only available on Tuesdays.