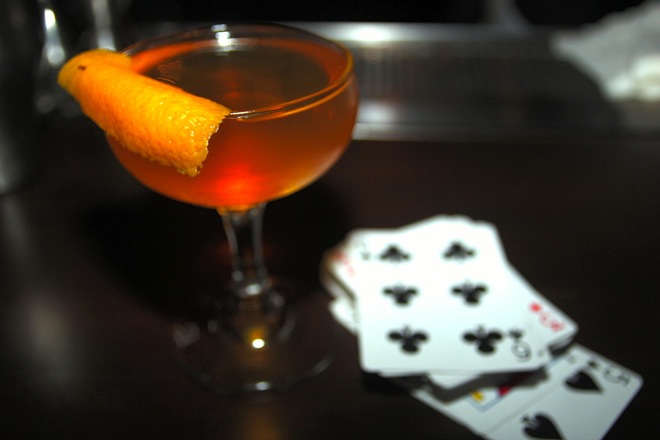 Bartenders Joshua Lucas (The Writer’s Room, Tar Pit) and Jordan Gold recently revealed the brand-new cocktail menu they’ve created for L.A. landmark the Magic Castle. Due to in-house politics, it took a year to bring the venue—which has five bars—up to craft cocktail standards. “So now the Magic Castle has Kold-Draft ice and fresh juices, and we’re going in and teaching the cocktail techniques,” said Lucas.

The eight new cocktails—five of which are revealed below—are full-bodied with the intention of entertaining the palate. “As long as all five of your senses are being activated, it’s a win for magic,” continues Lucas. “What we try to do is something that will entice someone to come back to the Castle… we [create an experience] you can’t get at home or anywhere else.”

Most of the drinks aren’t only magical in name, however. The “Open Sesame”—which is also the password to get into the Castle (shhh…)—is made with Berentzen apple schnapps, Hendrick’s gin, lemon, pineapple, simple syrup, and topped with atomized black sesame seed oil. That little spritz of sesame tricks the palate and leaves you smelling something different from what you ultimately taste.

For cocktails that actually perform magic tricks—i.e. change flavor and colors—guests will want to check into the Magic Castle’s Hat & Hare Pub, which will host an R&D bar sometime around March of next year. Inspired by chef Grant Achatz’s outside-the-box cocktail bar Aviary in Chicago, Lucas created a cocktail for the pub that transforms from one thing to another. “You’re going to start off with an Americano and then in five minutes the Americano slowly changes into a Negroni as it warms up and its flavor comes through.” Um. Neato!

The new menu debuts in the Magic Castle on January 14 and drinks will be priced at $13 each.